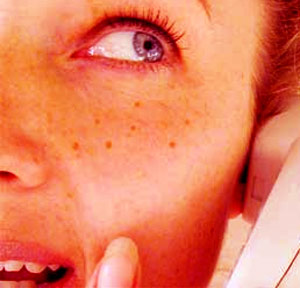 A new study has found that women with freckles, moles and skin that easily gets burnt are at a greater risk of developing endometriosis, a painful fertility-related condition.

Endometriosis is a common medical condition which causes endometrium, the tissue that normally lines the uterus, to grow beyond our even outside the uterus.

Researchers from Australia and France have found that endometriosis may be genetically-linked to malignant melanoma, which is the most dangerous form of skin cancer.

The study was conducted on 100,000 older French women. For the study, the research team examined the lifestyle and medical history of the women. It suggested a similarity between some risk factors for both conditions.

The researchers found that around 4,000 of them had endometriosis.

According to lead researcher Marina Kvaskoff, “We have demonstrated that women with a higher number of models or freckles, or a greater susceptibility to sunburn, have a higher risk of endometriosis.”

However, Kvaskoff also added that skin or hair color had no relation to increased risk whatsoever.

“There seem to be some common genetic links between melanoma and endometriosis, but this needs to be further investigated,” she added.

As of now there is no known cause or cure for this condition which affects around 6% of women. However, it can be managed through surgery, medication or hormone treatment.