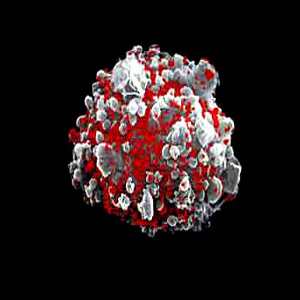 Scientists at the University of California, San Diego and Oak Ridge National Laboratory have brought in a ray of hope for HIV-infected people. They have discovered the mechanism by which a genetic circuit in HIV controls whether the virus stays dormant or turns on.

This new discovery has thus led the scientists to successfully turn the virus dormant. This shows promise for HIV therapy and understanding of cellular decisions.

This study was led by Leor S. Weinberger, professor of chemistry and biochemistry at UC San Diego together with Michael L Simpson of Oak Ridge National Labs and Roy D. Dar of the University of Tennessee, Knoxville.

They have said that the study shows how a developmental decision between HIV’s two replication fate is made.

For this, the scientists measured the randomness or the noise in HIV gene expression. This allowed them to investigate how HIV decides to replicate or remain dormant.

“It’s significant for two reasons. First, many researchers are interested in determining which cellular processes generate biological noise. We, instead, asked if the cellular noise could tell us anything about HIV and the cell- and it did. What it told us is how a developmental decision is made by HIV,” said Weinberger.

“We still don’t understand how developmental decisions are made at the single-cell level- for example, how a particular stem cell differentiates into many different cell types- and whether noise can drive this decision. Surprisingly, viruses appear to be good models for understanding this type of cellular decision-making,” he further went on to say.

The study on the whole has provided a new device to probe cellular and viral regulation and how other biological decisions are made.