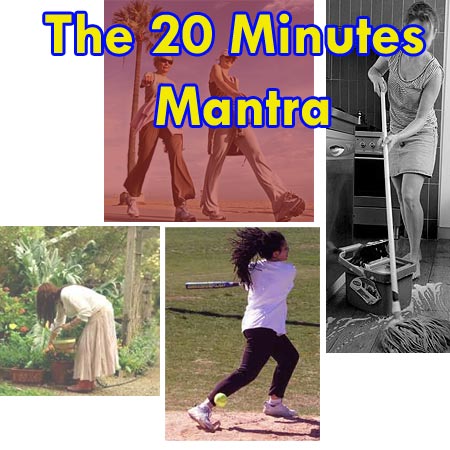 A new study carried out by the scientists from University College London (UCL) states that a mere 20 minutes of any physical activity, which includes housework, in a week’s time is sufficient to enhance mental health. Though practically each and every person present on earth is aware of the fact that regular exercise regimes are beneficial to mental health, what most of us are a little confused about is the type of activity and in what amount, is it most advantageous.

The findings, which appear in the British Journal of Sports Medicine, are based on a representative sample of as many as 20,000 men and women who were questioned for the Scottish Health Survey about their state of mind and how much weekly physical activity they were involved in.

With the help of a validated scoring system, it was concluded that more than 3,000 of the individuals were apparently suffering from stress or anxiety.

However, the key to a lower risk of stress seemed to be any form of physical activity on a daily basis. Various factors, including age, gender, and the presence of a long term condition, were taken into account as well whilst drawing analysis.

While sports lowered the risk of distress to the maximum by a massive 33%, other activities such as housework, gardening and walking also helped in releasing stress in a moderate amount.

In addition, the results also noted that while only 20 minutes enhanced the mental state, the more activity a person indulged in, the lower were their chances of psychological distress.

And of course, the benefits of regular physical activities in keeping serious diseases, such as heart disease and certain cancers, at bay are not unknown to anybody.

The study authors also added that it improves several biological risk factors, such as glucose intolerance and inflammation, which have been closely associated to depression and dementia.