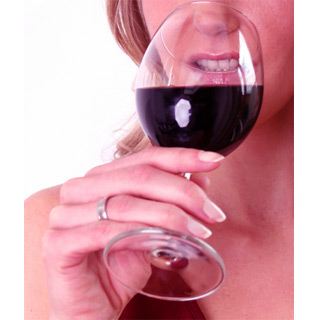 Wondering why, then read on.

Swedish experts have established that women who consume wine are less likely to develop dementia, over a period of time.

Researchers from Sahlgrenska Academy at University of Gothenburg in Sweden studied 1,458 women who were included in the so-called Population Study of Women from 1968.

These women were asked to report about their frequency of drinking wine, beer, and liquor by selecting from seven categories on a scale from ‘never’ to ‘daily.’

Over the 32-years duration, 162 women were diagnosed with dementia. On the other hand, amongst the women who drank wine, a considerably lower proportion suffered from dementia.

Professor Lauren Lissner, lead researcher along with Professor Ingmar Skoog, both with the Sahgrenska Academy said, “The group that had the lowest proportion of dementia were those who had reported that the only alcohol they drank was wine.”

However, what the researchers are yet hesitant to speak about is whether a woman should begin to drink wine, continue to drink wine, or increase its consumption over time. Also, these conclusions cannot be taken as true for men, who have an altogether different pattern of drinking.

“We have to be very cautious when we interpret these results, since we can’t see in this type of population study what is cause and what is effect,” noted Lissner.

Lissner also mentioned, that several other factors in women who drink wine could also offering them protection against dementia, factors that were beyond the analysis of the researchers.

Adding, “But the correlation found is a strong one and can’t be explained by other factors that we can measure, such as education, BMI, and smoking”

The team in its future analyses will attempt studying the effect of wine on more specific types of dementia, such as Alzheimer’s disease.