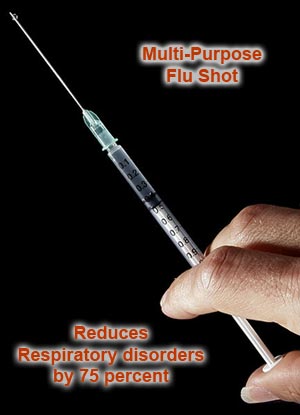 An Indian scientist from Delhi University has concluded that annual flu vaccinations provide a multi-purpose by preventing acute respiratory illness, successfully decreases overall problems by 75% and reduces the issues pertaining to breathing.

Dr. Balakrishnan Menon from the Vallabhbhai Patel Chest Institute at the University of Delhi, India conducted a study with 87 male patients with chronic obstructive pulmonary disease (COPD). “COPD is a serious lung disease that causes breathing problems and is responsible for a significant number of outpatient and emergency department visits as well as inpatient hospital stays. It has increased by 40 per cent since 1942 and is now the world’s fourth leading cause of death and twelfth leading cause of disability. The World Health Organization (WHO) predicts that by 2020 it will become the third leading cause of death and rise significantly in the disability stakes to fifth place,” said Menon.

All the COPD patients in the study aged less than 65 years were observed for a year, which is before and after they received the vaccine initially. The researcher found a significant improvement after the flu shots were being given to the patients and it brought down the incidence of acute respiratory illness and acute exacerbation of COPD by 67 percent.

“Influenza viruses are a major cause of death and serious illness in elderly people, particularly if they suffer from COPD. Our study was undertaken in a population where uptake of the vaccine is traditionally low and it had a marked effect on the men who received it. This could also explain why our 67 per cent reduction was higher than the 32 to 45 per cent falls reported by previous studies carried out in populations where the vaccine is more common,” noted Menon.

The study surely gives good news to COPD patients and it will let them breathe easily. The study about this multi-purpose drug is published in the current issue of IJCP, the UK-based International Journal of Clinical Practice.