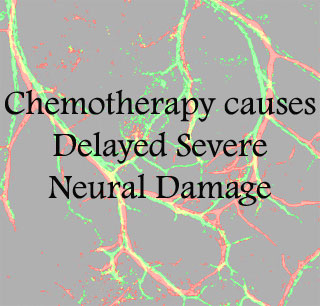 The cause of neurological cognitive side effects such as short-term memory loss, extreme cases of seizures, vision loss dementia experienced by cancer patients has now been determined by the scientists. A study by a team of researchers at the University of Rochester Medical Center (URMC) and Harvard Medical School has linked chemotherapy with cognitive side-effects.

Chemotherapy drugs kill healthy brain cells long after the treatment is completed. This causes degeneration of brain cells (central nervous system) and is also known as delayed adverse neurological consequences. This occurrence is termed as ‘chemo brain’ by scientists. It has also been found that a single chemotherapeutic agent – 5-fluorouracil (5-FU) is enough for the delayed degeneration of CNS. 5-FU is an agent that is often employed to treat cancers of colon, rectum, breast, stomach, pancreas, ovaries and bladder, at times with combination of other chemo agents although they are unsure whether there are other underlying biological factors like exposure to multiple chemotherapeutic agents or the human body’s reaction to cancer.

Virtually all cancer patients experience the chemo-brain syndrome which subsides over time but cognitive side effects still linger long after the treatment has ended in a subset of patients who have been administered with heavy doses of chemotherapy. This has been proven by a study that has estimated that almost 15-20% of US’ 2.4 million female breast cancer survivors have suffer from cognitive impairments year after the treatment while another study showed that 50 % of women had not recovered their cognitive abilities completely even a year after treatment.

Professor Mark Noble and colleagues at the University conducted their study on mice by systematically administering 5-FU for short term. The team inferred that 5-FU caused acute damage to CNS that progressively worsened with time. It was also inferred that the damage slowed the process of transfer of information from ear to brain.

The harm is characterized by damages done to Myelin sheaths which are necessary for a normal and healthy neural function. 5-FU was found to be toxic for not only the CNS’ cells but also cells which produce insulating myelin sheaths. Findings also show that the degeneration caused due to chemotherapy differs from the degeneration caused due to irradiation which implies the possibility of new class of delayed CNS degenerative damage.