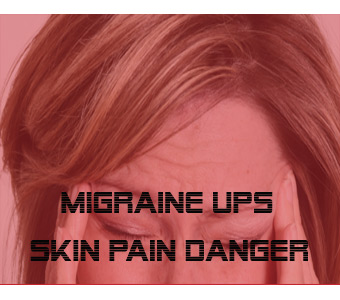 Patients of migraine are bound to have an acutely sensitive skin as per a new study. Although people who have severe headaches also have sensitive skin, the degree of sensitivity and pain increases in cases of chronic or episodic migraine. This syndrome is technically known as ‘Cutaneous Allodynia’.

Cutaneous Allodynia is extreme pain experienced by the skin or scalp caused due to regular and normal activities like combing hair or wearing jewelry.

This accounts to as much as two thirds of the total number of migraine patients suffering from the syndrome.

The study was conducted by Dr. Marcelo Bigal, of Albert Einstein College of Medicine, New York City and his team of researchers, where 17,000 people suffering from headaches were surveyed. It was found that as much as 12,000 suffered from migraine, 1,491 were suspected of having migraines and 3,345 experienced different types of headaches like tension headaches.

“The phenomenon of cutaneous allodynia seems to be correlated to true migraine;” said headache expert Dr. Bruce Silverman, a neurologist at Providence Hospital and Medical Centers in Southfield, Mich. “For those with migraine and cutaneous allodynia, the idea of treating prior to the onset of symptoms may offer a greater response.”

According to Silverman, the study highlights the importance of early treatment in migraine which can be done with the help of triptan medications. Triptan medications have to be taken in early migraine before the person starts experiencing acute cutaneous allodynia as the medication proves to be ineffective then. “When you delay treating and don’t take a triptan right away, it doesn’t work as well. It gets harder and harder to get rid of,” says Dr. Keith Siller, an assistant professor of neurology at New York University Medical Center in New York City.

A person diagnosed with migraine should immediately seek help from neurologists as the medications for it are available and it will be well treated in time suggests Siller.