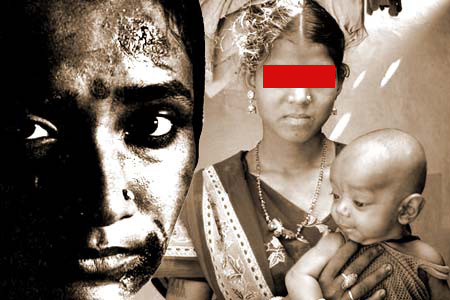 S.V. Subramanian of the Harvard School of Public Health (HSPH) said, “There are strong evidences that domestic violence is linked with malnutrition among both mothers and children. In India, the withholding of food is a documented form of abuse and is likely correlated with the perpetration of physical violence”.

From the Indian National Family Health Survey of 1998-99, the study population had included 69,072 (aged 15-49 years) women and 14,552 children (12-35 months). Everyone had to go through personal interviews by trained personnel. The information collected includes body measurements, blood samples, and information of women and children exposed to domestic violence in the previous year.

There are different forms of domestic violence like physical violence, sexual abuse, emotional abuse etc. Domestic violence is not area specific. It could happen with anyone anywhere. It’s evident within all the culture, race, religion and class. Women and children suffer from malnutrition because of the domestic violence in some way or the other. Violence can be in any form, like hitting, pushing, unwanted or forced sexual activity, pestering, financial abuse etc. The reasons for malnutrition can be when an individual experiences low quality of nutrients not comprising of healthy diet, starvation for a longer period of time, inadequate availability or absorption of energy and proteins in the body.

There can be psychological stress effects on the women and children because of the link between domestic violence and nutritional deficiencies, explains S V Subramanian, associate professor of HSPH, and co-author of the study.
Moreover, it is seen that when a women is incapable in the process of making decisions herself and within her family and things as basic as cooking food with right choices and quantity of food she prepares; all these issues are highly linked with domestic violence.

The findings were that women who reported more than one instance of domestic violence in the prior year had 11% increase rates which are prone to having anemia and 21% increased likelihood of being underweight, as compared to women with no such history. The mother’s demographic information was not detailed in this kind of difference. There is a relation between domestic violence and malnutrition among women and children in India suggests data.

The findings were published online on March 26 in The American Journal of Epidemiology.