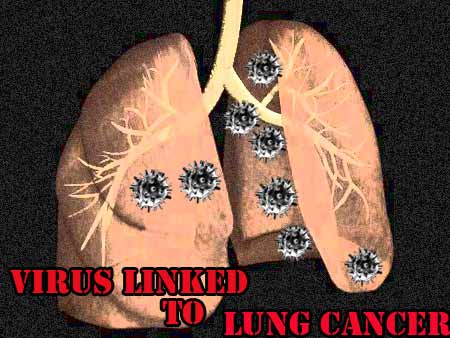 Till date factors like smoking, radiation, asbestos were known to be the common causes of lung cancer. However, a recent study by experts asserts the fact that viruses too play a major role in the development of lung cancer. This was discussed and presented in papers at the 1st European Lung Cancer Conference, jointly organized by the European Society for Medical Oncology (ESMO) and the International Association for the Study of Lung Cancer (IASLC) in Geneva, Switzerland.

The role of virus was suspected since long, but with growing number of evidences scientists have now come to a conclusion that common viruses do worsen the case of lung cancer. The virus that was identified as the cause of cancer development was ‘Human Papilloma’ Virus (HPV) which is also the cause of cervical cancer.

Samples of 22 cancer patients in Kentucky were collected by Dr. Arash Rezazadeh and colleagues from the University of Louisville, Kentucky, USA. These patients were also smokers. Out of the 22 samples, 6 tested positive for HPV. One of the 6 samples also showed that it was the cervical cancer that had spread to the lungs. The rest of the 5 samples tested positive for 2 types of HPV type 16, 2 types of HPV type 11 and HPV type 22. “The fact that five out of 22 non-small-cell lung cancer samples were HPV-positive supports the assumption that HPV contributes to the development of non-small-cell lung cancer,” say the experts. According to Dr. Rezazadeh, HPV also plays the role of carcinogen which increases the risk of cancer in smokers.

Virus was found to be one of the carcinogenic factors in yet another study that was conducted by Israeli researchers, but their finding showed ‘measles viruses’ as the cause.

Lead author Prof. Samuel Ariad from Soroka Medical Center in Beer Sheva, Israel said, “Measles virus is a ubiquitous human virus that may be involved in the pathogenesis of lung cancer. Most likely, it acts in modifying the effect of other carcinogens and not as a causative factor by itself.” This is asserted by his study that proved more than half of the tissue samples taken from 65 patients suffering from non-small-cell lung cancer had tested positive for measles virus.