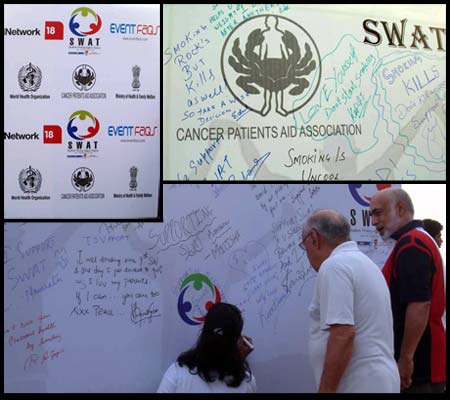 It is common knowledge that tobacco consumed in any form is extremely detrimental to one’s health. In fact, statistics have shown that millions in India itself die each year from tobacco-related deaths. Governments and health services try their best to persuade smokers to give up the ‘cancer stick’ by resorting to public messages and graphic images on cigarette packets. But, nothing seems to work, for it is the most addictive drug nicotine which is at play. Some try to go cold turkey and survive to see brighter days. In fact, non-smokers would deem it easy to wake up one day and just resist taking a puff at all. But, this is not true for smokers who know just how difficult this would be. So, why even take that first drag in the first place. It can surely save your life after all.

SWAT, a registered NGO since 2004 aimed to do just this on April 26, 2008 in Mumbai, India. Interestingly, SWAT stands for Students Working Against Tobacco and is an initiative undertaken by the students of EMDI, a renowned Event Management Institute. The credo and objective of SWAT says, “Tobacco Free Youth”, and through awareness the current EMDI students and SWAT members seem to have got it going.

Rather than in-your-face public messages, they have and continue to address the issue of tobacco use though various ways such as: 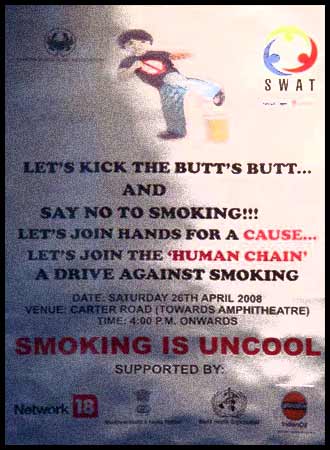 Just like the previous 5 years, this year’s SWAT initiative also got an overwhelming response. The sunset gathering at Carter Road’s Amphitheatre, a favorite hang-out with Mumbai’s youth saw many come together for a great cause.

Aptly, this year SWAT joined hands with CPAA (Cancer Patients Aid Association), a charitable organization that works towards the cause of cancer patients.

The event was well organized and took off spot on time with two gregarious EMDI students explaining to all present the main reason for the gathering.
Dotting the vicinity were EMDI students as well as kids donning SWAT t-shirts. Others gathered to learn what the meet-up was all about. Plus, everyone got to go home with a cool SWAT t-shirt, further propagating the cause.

Siddharth Jain, a SWAT founder member and a student of EMDI batch 2004 explained, “This initiative is in line with SWAT’s constant endeavour to deglamourize smoking. Over the past four years, we’ve repeatedly demonstrated how having fun, beating stress, and od course being super cool, are best done without this deadly nuisance of a habit. Here’s the rocking sans the smoke!”

A skit was also performed to spread awareness and encourage people to “stop the first smoke.”

Also seen at the event were a number of white boards with handwritten messages reinforcing that smoking is not cool at all. Passers-by and walkers also felt encouraged to join in and voice their message on these boards.

Later as the sun went down, a human chain consisting of a large number of EMDI students was formed. They reinstated their stance on how they felt about the deadly habit.

All in all, we think that SWAT is a superb initiative for the youth and by the youth themselves. It is nothing short of a brilliant attempt to bring about a smoke-free world. With rocking initiatives such as the human chain and 2005’s hit rock show with bands like Vayu and the likes, we know that SWAT will see the change they want to bring about amongst the youth.