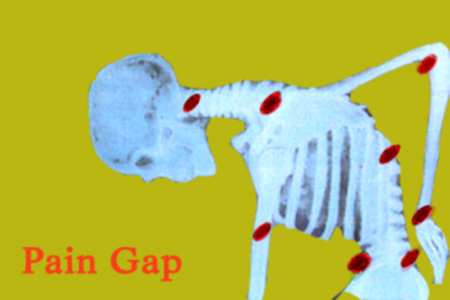 According to the researchers in Princeton University, there exists a ‘pain gap’ in America that varies with different income groups. The research concludes that pain is inversely proportional to income.

It has been found that the intensity of pain depends on whether the person belongs to the higher income group or the bourgeoisie. Study shows that almost 28% of the population in America which is under moderate or severe pain, belongs to the group with less education and fewer earnings while a negligible 8% percent of high salary earners experience some or the other pain.

“To a significant extent, pain does divide the classes, and just how the levels of pain vary among people and across activities — that has never been found before until now,” said Krueger, the Bendheim Professor in Economics and Public Policy. “People in households making less than $30,000 a year spend almost 20 percent of their time in moderate to severe pain, compared with less than 8 percent for those in households with income above $100,000 a year,” he added. It has also been reported that the study subjects who did not have a high school degree experienced twice the average pain in the whole day than the college graduates. However, who among these is in pain and when, has not been understood by the researchers.

“The novelty of this study is the possibility to relate people’s pain experiences to their daily activities,” notes Juha H.O. Turunen, a professor in the Department of Social Pharmacy at the University of Kuopio in Finland.

The research was conducted in a novel way where the 4000 participants reported their day-to-day activities and if they experienced any pain and the intensity of pain in the period of 24-hours in a diary survey. The researchers then co-related the pain with the activities, demographics and the time of occurrence; given in the information. Most of the pain that was reported was physical pain although the researchers had not asked the participants to distinguish between physical and mental pain. Researchers say that a pain, mental or physical is always subjective.

The study is immensely helpful for making health care policies and social programs for those who are in pain and are supporting their families. In America, pain has a large impact on health care system and the nation’s economy as Americans spend billions of dollars on medications and painkillers. Businesses in America incur losses of about 60 billion dollars annually just because the working class is suffering from pain.

“The burdensome life of those caring for their loved ones must be supported by society,” he wrote. The differing levels of pain recorded by varying income groups, Turunen said. The varying level of pain, according to him, “emphasizes the need for pain preventing measures such as better ergonomics and better availability of occupational health services for jobs with high physical strains.”

The ones in blue collar jobs reported very high rates of pain when they were on work which makes up 44% of the total time Americans experience moderate or severe pain. The intensity of pain was lower when the workers were at home. They were also the ones who were least satisfied with life and health and felt at ease when their friends and spouse were around. “The pain doesn’t go away in many cases, when people stop working,” Krueger, a professor of economics at Princeton University, said.

The study was conducted by Alan Krueger and Arthur Stone, a professor of psychiatry and behavioral science at Stony Brook University and appears in the journal ‘The Lancet’ on May 3, 2008.