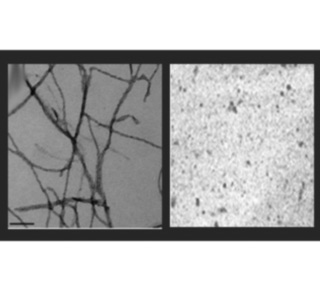 According to researchers from the University of Pennsylvania School of Medicine, a small molecule has the ability to separate the protein fibers in an unusual way which is linked to Alzheimer’s and other diseases. The findings have been published online in the Proceedings of the National Academy of Sciences.

The unusual gathering of amyloid fibers and other misfolded forms in the brain are the reasons to neurodegenerative diseases.

“Surprisingly, a small molecule called DAPH selectively targets the areas that hold fibers together, and converts fibers to a form that is unable to grow. Normally fibers grow from their ends, but the drug stops this activity,” says senior author James Shorter, PhD, Assistant Professor of Biochemistry and Biophysics. “Our data suggest that it is possible to generate effective small molecules that can attack amyloid fibers, which are associated with so many devastating diseases.”

Currently the research team is working on how DAPH plays the role of a wedge, withholding the growth of fibers.

“Presumably DAPH fits very neatly into the crevices between fiber subunits,” explains Shorter. “When we grow yeast cells with the prion in the presence of DAPH, they begin to lose the prion. We also saw this in the test tube using pure fibers. The small molecule directly remodels fiber architecture. We’ve really been able to get at the mechanism by which DAPH, or any small molecule, works for the first time.” It was found in the lab by the co-author Vernon Ingram, Shorter’s collaborator at the Massachusetts Institute of Technology (MIT) that DAPH is seen in small molecules which reduces amyloid-beta toxicity.

Shorter says, “We’d need one that hits only problem amyloids, and DAPH gives us a hint that such selectivity is possible.” It is necessary to identify DAOH variants for deleterious amyloids.

As some of the amyloids might be useful such as one of its forms would be involved in the long period memory formation and also it would be compulsory to verify the drug that doesn’t hit all amyloids ruthlessly.