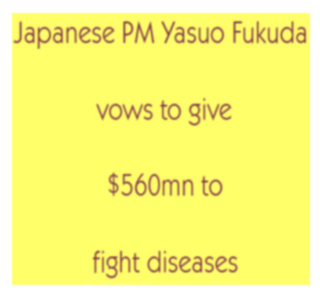 Japan has declared to give a record $560 million to the Global Fund to Fight AIDS, Tuberculosis and Malaria. Giving a firm commitment at an international conference conducted in Tokyo by the Global Fund to combat three diseases to improve the health of the people, particularly in Africa, Japanese Prime Minister Yasuo Fukuda made this promise publicly.

Japan’s vow has in a way showed its dedicated commitment as a host of the Fourth Tokyo International Conference on African Development (TICAD), which will be held in the central city of Yokohama in the month of July and the Group of Eight (G8) summit in the northern city of Tokyo.

Fukuda said he hoped “this provision will make it possible for the Global Fund to further its activities and save more lives” as around 80 percent of the deaths around the world and mostly in the sub-Saharan areas of Africa are due to AIDS and malaria.

Fukuda pressed more on the need for “all-participatory” co-operation by eliminating three diseases to reach the UN Millennium Development Goals by 2015.

Moreover, Japan has crossed past records of $500 million which Tokyo recorded in the fiscal year from 2005 to 2007. There is no stipulated precise time period as the nation is going through a tight fiscal budget.

Since 2002, the Global Fund has been making $10.8 billion for almost 527 projects in 136 countries and has been saving 2.5 million lives of the people. It is said that the three diseases, i.e. AIDS, Tuberculosis and Malaria, have been killing five million people every year.