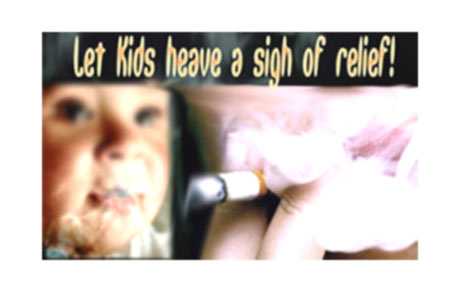 Smokers smoke; but are these smokers aware that they are not the only one’s getting affected but are also affecting the rest of the people around them. People smoking inside the house should pay attention to children living in the house who are exposed to the second hand tobacco and are most likely to get severe infectious diseases and would then have to get admitted in to the hospital; say the findings of a research which is published online ahead of print in Tobacco Control.

Adults who smoke in the house would have a second reason to think upon as smoking is not only injurious to them but also to the children in the house as they are most prone to inhale the smoke.

Such children who breathe smoke in the house are bound to face greater risks of different diseases and infectious illnesses like meningococcal disease and respiratory illness, the results showed. Children with a low birth weight or those who were born in a premature condition, are most likely to get harmed with the cigarette’s smoke in the first few months of life itself.

The researchers examined the connection between second hand smoke exposures and children admitted in the hospital for any infectious sickness in 7,402 children born in Honk Kong between April-May 1997. The study’s follow-up period was until the children turned eight years old.

If the children within the distance of 3 meters in the house got exposed to the smokers smoke during the infancy period, then there are increased risks of them getting hospitalized by the first 12 months itself.

If the infant is exposed to smoke in the very beginning of its birth then more profound the effect is with second hand exposure, and when just within the first six months, the child is most likely to get hospitalized by 45 percent by the time the child was 8. The premature babies were at double the risk and are prone to get hospitalized and those babies born with a low birth weight were 75 percent more prone to be hospitalized until they turn 8 years of age, the study found.

“This is just adding to the list of why people should not be smoking,” said Dr. Len Horovitz, a pulmonary specialist with Lenox Hill Hospital in New York City. “It’s probably that smoking is not just a respiratory irritant, but many things in smoke affect the immune system.”

The authors said, “An excess risk of severe morbidity from both respiratory and other infections for all infants exposed to second hand smoke suggests that such exposure, as well as acting via direct contact with the respiratory tract, may also affect the immune system.”

Further the authors said that premature infants who are born with a low birth rate are at a greater risk as their respiratory and immune systems are not properly developed.