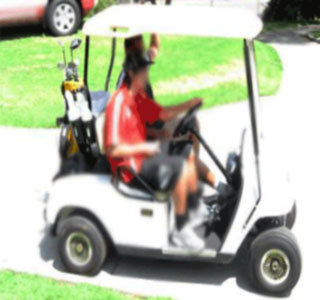 The injuries causing in the golf carts used in the premises of the golf course has been increasing. According to one of the article in the July 2008 issue of the American Journal of Preventive Medicine, where in the injury rate had reached up to 130 percent from 1990 until 2006.

Around 150,000 people in this time period suffered golf cart-related injuries and people who were injured belonged to the age right from 2 month old infant to 96 years old man or woman.

Due to the advanced technological developments, golf carts are able to function much faster and have become more powerful in covering the distance of almost 25mph and travel over 40 miles on a single battery charge. Golf carts are regularly used for certain transportation reasons like sporting events, hospitals, airports, national parks, college campuses, business and military bases.

Gradually the number golf cart-related injuries rose and during the study period it was found that from approximately 5772 cases in 1990 to an estimated 13, 411 cases in 2006, there was a rise of 132% . The occurrence of such injuries was mostly at sports or recreational centres which are 70.3%. Certain injuries happened on the streets and resulted in concussions and the injured person needed hospitalization compared to those injuries occurring in some other places.

Lara B. McKenzie, an investigator, Nationwide Children’s Hospital, Center for Injury Research and Policy, Columbus, OH said, “Because golf carts are not designed for the safe transportation of children, their use for transporting children should be strongly discouraged….In addition, private and public facilities that allow golf cart use can help prevent cart–related injuries by requiring driver’s licenses and safety/operations training, establishing safety policies and considering golf cart safety in the design of pathways and landscapes. Given the large increase in golf cart–related injuries over the study period, greater efforts are needed to prevent these injuries, especially among children.”

The action in which most of the times the injury occurred was during falling or jumping from a golf cart in both adults and children; around 38.3%. Moreover children faced higher risk than adults for falling from a golf cart. The area of injury in the body was twice from falling off the golf cart was in the head or neck and six times resulting in concussion than injuries caused due to other reasons.