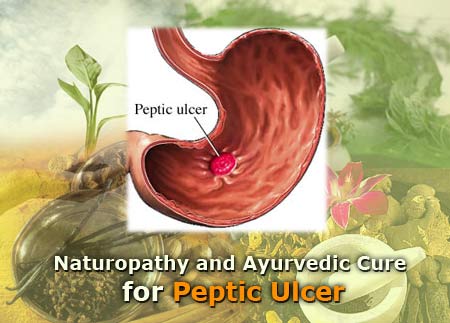 Peptic ulcer is known as Grahani in Ayurveda. This disease occurs in people with aggravated vata dosha.

Peptic ulcer is one of the most common diseases of the gastro intestinal tract. It refers to an eroded lesion in the gastric intestinal mucosa. An ulcer may form in any part of the digestive tract which is exposed to gastric juice, but is usually found in the stomach and duodenum. The ulcer in the stomach is known as gastric ulcer and that of the duodenum is known as duodenal ulcer. Men are more affected by duodenal ulcers whereas women usually get ulcers in the stomach. These diseases are affected maximum at adulthood, where there is increased stress and tension. They however remain sufficiently common in old age and cause a lot of trouble. Some peptic ulcers are very chronic, one which first develops in middle age but there are many patients who first get ulcer symptoms in old age.

1. Pain and discomfort just below epigastric region
2. Hallmark of gastric ulcer is pain, an hour after meals when the stomach is full and the acids have been secreted in quantity for food digestion.
3. Hallmark of Duodenal ulcer is pain between meals when the stomach is empty. This pain is relieved by food, especially milk. It is often described as hunger cramps.
One can imagine a cloth which isn’t ironed. In the same fashion the stomach is creased to an extent that it produces cramps. The release of creases i.e., cramps happens after ironing i.e., intake of food.
4. Other uncommon symptoms like on and off constipation due to food irregularity, flatulence are also seen.

A really severe peptic ulcer can lead to serious complications like hemorrhage, perforation or obstruction of the orifice through which the food passes from the stomach to the intestine. Unless treated in time, it can lead to massive bleeding and shock, or even death.

Peptic ulcers in old age may be present in a variety of ways. Some elderly patients may suffer from weight loss, general debility, anemia or painless vomiting. The symptom of pain is often absent in old age because the elderly may have reduced inflammatory response to tissue injury. The most serious complication of peptic ulcer in old age is hemorrhage. When hemorrhage is acute, it may result in death.
Chronic hemorrhage may give rise to iron deficiency anemia.

Peptic ulcer results from hyperacidity which is a condition caused by an increase in the hydrochloric acid in the stomach. This strong acid, secreted by the gastric cells breaks down the food for digestion, but the same acid when constantly produced in excess have the capacity to destroy the gastric mucosa. Initially there is irritation followed by destruction/ulcer.

Overeating, spiced foods, tea, coffee, alcohol, tobacco use, depression, stress, working under sun/ or near source of strong heat (as in bakeries) for long periods, medicines like aspirin or pain killers, and infections.

Emotional stress or nervous tension also plays a major role in producing “stress ulcers”. The stomach is a highly sensitive organ and nervous activity can slow down or speed up digestion. People who are involved in excessive worry, anger, tension, jealousy and hurry are more prone to suffer from ulcers than those who are easy going and relaxed. Ulcer patients are usually highly strung, irritable, short tempered, ambitious, over excited and very restless. They generally take upon many tasks at a time and keep on worrying about its results.

Patients who keep on taking antacids, proto pump inhibitors like pantoprazole and omeprazole harm themselves more than doing good. Though they may get initial relief as these are neutralizers or acid inhibitors, the stomach responses by producing even more acid as the root cause of the problem is not dealt with.

Diet is of utmost importance in the treatment of peptic ulcers. It should contain alkanising foods which neutralizes acids. Acidic foods should like:
1. All animal food: meat, fish, eggs
2. Dairy products\: pasteurized milk, cheeses, curd and butter
3. Dried peas and beans
4. All cereals and pulse
5. All nuts and dried seeds
6. All processed foods
7. Fried and spiced food
8. Sweet food
9. Salty, sour astringent food, should be completely avoided.

The plantain in banana is antiulcerogenic. Cabbage is another useful remedy. It contains anti-ulcer drugs. It was demonstrated in Stanford University that 850 ml of fresh cabbage juice every day relieved pain and healed both gastric and duodenal ulcers. This fact of rapid healing with cabbage juice was revealed by X-ray and gastroscopy. Cabbage can also be boiled, and this boiled water can be taken twice a day.

Almond milk and raw goat milk is also useful in the treatment of ulcer.
Raw vegetables and citrus fruits should be avoided in the starting phase of the treatment.

Potatoes and squashes can be taken as they are well tolerated. Fried foods, foods with additives, pickles, spicy, sweets, meat, tobacco in all forms, alcohols and over-ripe fruits are to be avoided as they are hard to digest and cause lots of flatulence and acidity. This will also delay healing as they will cause irritation to a sensitive stomach.

How rapidly the ulcers heal will largely depend on the correct assortment of essential amino acids and sufficient ascorbic acid. The neutralization of stomach acid therefore interferes with iron absorption. Several studies have proved that the combination of vitamin A and vitamin E have not only protective effects against the development of ulcers caused by stress but also have a curative effect on existing ulcers.

Certain rules while eating should be taken care of, which help in a faster cure of the ulcers. The patient should never eat when emotionally upset or when he is not hungry; even if it is meal time nor when his mouth is dry. He should chew every morsel thoroughly. He should eat only natural foods and take in food in as dry a form as possible. Meals must be small and frequent. All foods and drinks which are either too cold or too hot should be avoided.

The patient should drink twelve to fourteen glasses of water in the day, but should refrain from drinking any during meals. The patient should consume water half-an-hour before and one hour after he/she has eaten. Hot water packs should be placed between the shoulder blades and over the abdomen in severe bleeding cases.

Gentle massage behind the ears will also help to relieve stress. Before sleeping laugh a little which again is of great benefit in changing the behavior.

The ayurvedic medicine for ulcers is SUKUMARA GHRITA. Two table spoons with warm water to be taken empty stomach on rising in the morning. This dose might vary according to the digestive power of the patient. This dose is increased slowly to six teaspoons per day.
The ulcer pain is best controlled with SHANKH BHASMA AND MAHA SHANKHA VATI. This treatment is taken for a minimum of 6-8 months.