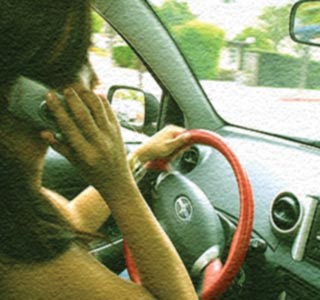 Mobiles has been an issue of concern in some way or the other for instance health problems which result because of usage of the mobile phones for long, listening to music through the head phones for more hours, crossing the roads while talking on the phone and the list goes on and on.

These issues indicate that mobile phones should be used for the right purpose. As and how the network connections are flourishing the type of usage also varies for example while driving, talking on mobile phone distracts the driver and leads to accidents on the road.

Motorists using cell phones while driving is as dangerous when compared to drinking and driving, according to educational psychologist Professor Michael Townsend. Although the warnings put up for public display regarding ban on hand-held cell phone usage for the drivers, has received a side eye by people who drive cars.

Professor Townsend had done an observational study which was published two years ago and had found that 4 percent of the 8700 central Auckland motorists used cell phones while driving. Prof Townsend is sure about the fact that the percentage of phoning while driving must have rose incredibly, due to several new cell phone companies and carriers in the market. Some of the international research findings points that using a cell phone while driving leads to “cognitive overload”, resulting to higher rates of driver error, says Michael.

The dangers of collision is almost four times more while talking on the phone and driving cars and such behavior leads to death which is nine times greater. “While 4 per cent might not sound sufficient to justify a ban, people can better comprehend the level of danger by imagining – as they drive home on a busy motorway – that one in every 25 cars coming towards them is being driven by a clinically drunk driver.”

The basic reason for the cause of accidents is that the person driving the car concentrates more on the conversation and not just the physical act which is because of holding a cell phone. “The nature of the conversation matters too, with deep and meaningful dialogues creating a greater distraction and added risk than small talk.” Prof Townsend confessed that having been won over by cell phones and fervently denied to carry a mobile until three months ago. Michael has now realized that how compulsory it has become to attend a cell phone during driving as he experienced himself.

He also admitted that he did a text message while he was in a line of slow-moving traffic. “A ban would act as a deterrent for many people whose inclination to use a cell phone while driving prevails over common sense and self-preservation.” In the period between 2002 and last year the number of injuries accounted to 411 accidents and 26 fatal crashes wherein the usage of cell phones was concerned.