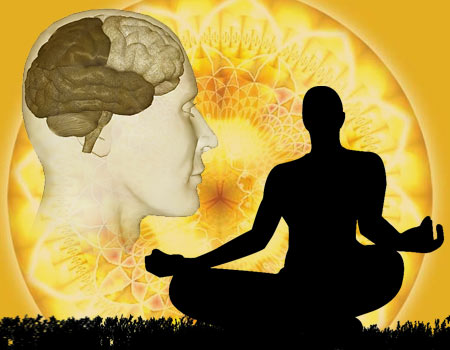 This is the first part in our two part series on Brain Breathing.

It is the oldest science explaining about rhythms of pranic body by controlling prana by manipulation of ones own breath by changing either swaras (ida, pingla, sukshmana – Explained later). In the language of modern science, prana is compared to the inherent energy/bioenergy of the body. Pra means constancy and na means movement. Therefore prana is a force in constant motion like a vibration moving to and fro without any interception. This can be the electromagnetic fields of our body which can be detected by kirlian photography. The vedas clearly mention about the pranic energy field around every human being. This is in the form of aura of light. If we look at old pictures of saints and Gods then we find that their head is surrounded by the circle of light. This swara yoga has been the major means of tantric tradition in India for the upliftment of the soul to supreme.

Swara yoga should not be confused with pranayam as both deal with prana. Pranayam is the methodology of breathing and controlling prana through various breathing techniques, while swara yoga is the science that deals with the pranaic rhythms by analyzing the type of breath.

Swara yoga was first explained by primordial guru Shiva to his disciple Parvati. Various other texts like Shiva Samhita, and Goraksha Samhita also mention a little about it. The explanation by lord Shiva to Devi Parvati was recorded as swaroday shastra. Swara is the breath flow and udaya means waking or rising.

According to this science, the analysis of breath unfolds the deeper secrets of cosmos, giving ultimate wisdom/union with God. With this science, a practitioner can become a perfected yogi, also known as siddha yogi.

We breathe 24 hours a day. Without breath we cannot normally stay alive for more than 3 minutes. This normal regular breathing has a deep impact on our consciousness and the body in general. With the gradual practice of swara one can rise to the highest human consciousness.

If we attentively observe our breath then we will realize that we actually breathe only through one nostril at a certain time, while from the other at other times, and both at a particular time. Breathing from either nostril keeps on changing during different times. It means we are affected by this alternate breathing pattern. Physiologically speaking the nervous system level is also affected, as this breathing produces certain stimulus in our body. This stimuli or alternate breathing pattern is not random and irrational. It has coded meanings in it. Every hour or hour and twenty minutes the nostril changes. This helps in physiological control of our nervous systems.

We have 3 different types of swara i.e., flow of breath. They are ida, pingla and sukshmana. The left nostril breathing is ida swara. The right nostril breathing is pingla swara and when both the nostrils are open, then we call it as sukshmana swara. It is not just by chance that the nostrils keep on changing. But it directly relates to our brain hemispheres. In vedic terms mind it is referred to as CHITTA, life force as PRANA, and spirit as ATMA.

The left nostril is related to mind energy, that is chitta, indicating that the life force is weak. This happens when you are worried, memorizing or very thoughtful. The right nostril indicates life force indicating that the pranic force is stronger and the mental aspect is weaker. This happens when you are doing physical actions like eating, walking talking, urinating etc.

Functioning of both the nostrils together, which we call sukshmana, indicates that the spiritual force, spiritual energy is in power. This happens when you are praying or meditating.

Each of our actions can be classified under these 3 types of swara, viz left for mental actions, right for physical actions and both swaras together in spiritual actions. This means if the right nostril flows while we are meditating, then we will have physical obstacles, like unstableness or restlessness of body. Similarly if the left nostril is flowing while meditation, then though physically we are undisturbed, but the mind will wander here and there. It is only that when both the nostrils are open, that our mind becomes one pointed and focused.

We will further learn how to correct our swaras for correct action, so as to bring mind-body and soul in perfect harmony.

It is a very well known proven fact that any disturbance in breathing affects the entire circulatory system, all visceral, reproductory and excretory system. Eg. The obstruction in the air flow inside increases the heart rate and decreases tissue oxidation. Further, disturbing in the alkaline base levels of the blood.

It is a surprising fact that the proportion of autonomic nerve fibres in the nasal cavity is said to be twenty times more than the other parts of the central nervous system. Breathing also affects our emotions and the release of different neurotransmitters.

The ida, the negative channel brings consciousness into every part of the body. Its energies are compared with that of the moon and hence also known as lunar nadi. Ida is associated with the parasympathetic nervous system which is responsible for the stimulation of visceral organs. Thereby creating relaxation of the superficial muscles and thereby lowering the body temperature. It is for these reasons that it is said to be cooling, relaxing and introverting.

Pingla is a transmitter of prana shakti. Its energies are compared to that of the sun and hence also known as solar nadi. It activates the physical body and externalizes the awareness. It is associated with the sympathetic nervous system, which releases the adrenaline to stimulate the superficial muscles. This system prepares the body to fight against stress and external activities. It is for this reason that it is said to be energizing, heating and extroverting.