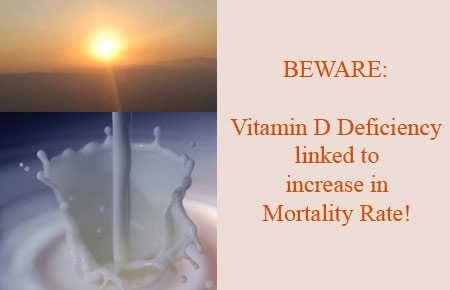 It’s now an old-lady’s saying that we have to have a healthy and balanced diet and acquire the essential vitamins and minerals for the proper functioning of the body. Here’s one more study explaining the benefits of vitamins and it also reveals that Low Vitamin D levels may also increase the chances of death.

The Research which was led by Harald Dobnig of the Medical University of Graz, Austria, measured the vitamin D levels in 3,258 patients, average age 62, who visited a medical center in Austria between 1997 and 2000, then followed their cases for 7.7 years. As the researchers were busy analyzing the reports, almost twice of the patients died during the course of the study and they were reported to have lower levels of Vitamin D. The results were published on Monday in the Archives of Internal Medicine, a publication of the Journal of the American Medical Association (JAMA).

To add on to your worry, it was found that Vitamin D deficiency has also been associated with several types of cancer. So it is advisable that you pull up your socks and try to squeeze in that little bit of Vitamin D into your body. Even if you are a vegetarian Cheese, Milk, Margarine, etc could be of great help in adding up Vitamin D in to your system. So add on that extra level of Vitamin D as it’s a matter of ‘Life and Death’.