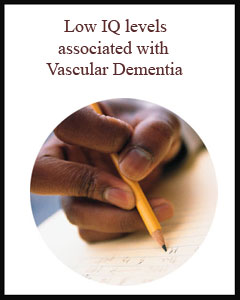 A study published in the journal of American Academy of Neurology reports that the children with low IQ in childhood are more likely to suffer from a type of dementia in future than the ones with higher IQ. This sounds scary but unfortunately this is what the study says.

According to the researchers, the individuals who have vascular dementia, one of the most common dementia after Alzheimer’s, have 40 percent more chances of having poor scores in their result cards during their school life. The study was conducted in Scotland on 173 individuals suffering from dementia, where their mental ability in 1932 at the age of 11 was examined.

However, in case of Alzheimer’s, the low IQ levels have no connection.

Vascular dementia is the result of damaged blood flow in the brain.

“These results point to the importance of reducing the vascular risk factors that can lead to strokes and dementia,” said study author John M. Starr, FRCPEd, of the University of Edinburgh. “Risk factors include high blood pressure, high cholesterol and smoking.”

According to Starr, the hypothesis that links IQ levels to dementia is supported more by the vascular risks that were determined during the study, than the “cognitive reserve” theory. On the other hand, the cognitive reserve theory is the theory according to which the greater the IQ and education, the greater defense people have against dementia. This enables them to remain free from dementia taking a toll on their personality and showing signs of the disorder even when it has started affecting their brains.