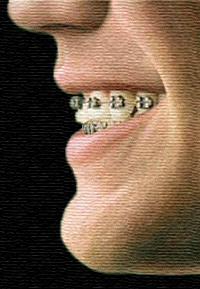 People always want their teeth to be beautiful, perfect in line like a string of pearls. While in most of the cases embracing braces for the perfect teeth isn’t a problem, what seems to be ugly is the metal.

According to a survey, people want more attractive braces, more aesthetic ones than the ones that show more metals. However, according to the dentists the more the attractive and creative the braces are, the least effective they are.

“The paradox is that the more aesthetic these dental appliances are, the more difficult they are to manage for the orthodontist,” said senior study author Henry Fields, professor and division chair of orthodontics at Ohio State University. “But those are what people like the most.”

In the past few years, colorful braces with elastic modules have become like a trend in teens.

However, the survey did not ask the 200 teens about which one was great looking, but they were asked to rate the attractiveness of the braces shown in the various images of teeth. Also, since only the teeth images were shown, whether the braces looked attractive or not did not depend on the patient’s faces.

“The general trends of appliance attractiveness are universal,” Fields said. “The stainless steel that we like to use, which is the most durable and efficient, is often ranked the lowest in attractiveness. These braces don’t wear out and you can get total control with them. The most aesthetic ones, the trays, have limitations on the types of movements you can make and forces you can deliver, and the efficiency. And the ceramics sometimes have breakage problems, and they tend to just be a little bit more delicate.”

The reason behind this has been cited to be the tendency of people to think of braces as accessories so much so that they are willing to shell out heavy amounts to make the braces look attractive.

“Some of the kids are going for braces made in the shape of a star, or have colors put on the ties that hold the wires to their brackets,” he said. “Some people are decorating their braces.” Typically, the kids in the age-group of the 10-13 acquire braces and want them to be attractive.

The study has been published in a recent issue of the American Journal of Orthodontics and Dentofacial Orthopedics.