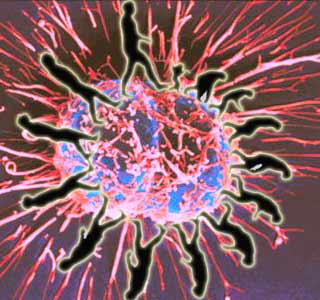 A recent study suggests that Darwin’s theory of natural selection is not limited to just humans and plants. Cancer cells also seem to follow the survival of the fittest concept.

Gerald Weissmann, MD, Editor-in-Chief of The FASEB Journal added, “Little could Darwin have known that his ‘Origin of the Species’ would one day explain the ‘Origin of the Tumour’. This research report completely changes our understanding of the many gene mutations that cause cancer.”

Dividing the data into 45 tissue types, researchers analyzed 500,000 cancer mutation records from the Catalog of Somatic Mutations in Cancer database. They found that each pathway was controlled by a single set of gene mutations even though different cancer pathways control different gene mutations. The study thus suggested that with gene mutations struggling through cancerous tumours, molecular “survival of the fittest” occurs in all living beings.

Analysts calculated the multiple gene mutation frequency within each tissue type in the same sample. This enabled them to recognize if the frequency of mutations was consequently higher or lower than those found in independently mutated genes. A further study revealed how the genes were mapped to promote cancerous tumours checking the occurrence of same or different cancer pathways by the genes in specific tissues.

The FASEB journal has published this report.