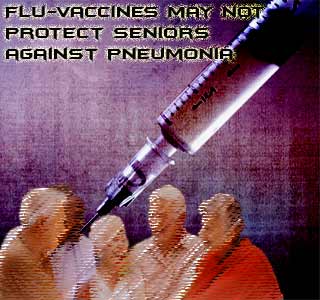 Researchers from the Group Health Center for Health Studies in Seattle discovered that pneumonia, a common and sometimes fatal complication of the flu could attack vaccinated seniors just as much as other elderly people who didn’t get vaccinated. They revealed that the ineffectiveness of the flu vaccine to prevent the flu could lead to the development of certain complications due to the flu including pneumonia.

Michael Jackson, lead author of the study published in The Lancet, and former postdoctoral fellow at Seattle’s Group Health Center for Health Studies, remarked, “Basically, it’s been taken for granted for a decade that this vaccine is effective in all seniors. We’re starting to find out maybe that’s not the case.”

Senior investigator at the Group Health Center for Health Studies, Lisa Jackson, mentioned, “It does suggest we’re not achieving the public health benefit of the influenza vaccine that has been suggested by prior studies. It certainly suggests there’s room for improvement.”

Ian Gemmill, former chair of the Canadian Coalition for Immunization Awareness and Promotion and medical officer of health for Kingston, Frontenac and Lennox and Addington Public Health commented, “But it’s also important to keep in mind there is no vaccine that provides a fail-safe guarantee against illness or disease. I wish it were a perfect vaccine, but it isn’t. It’s the best we’ve got now.”

To ascertain the effectiveness of immunization against the flu, Jackson’s team compared 1,173 people between the ages of 65 and 94 who developed pneumonia as against 2,346 people who did not get pneumonia. The participants had no smoking history, compromised immune system or frailty and were also not residents of a nursing home. With a similar rate of flu vaccination over three flu seasons of the study, researchers suggested that there were equal chances of vaccinated and unvaccinated seniors who got the flu to develop pneumonia.

Dr Jackson asserted that findings of the study should not be interpreted as failure in immunizations. He reflects that the study will enable researchers to explore alternatives for some seniors who may not benefit from the flu shot.