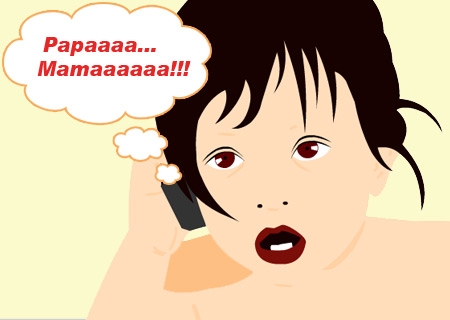 The study was conducted by Judit Gervain, post-doctoral, Dept. of Psychology Infant Studies Centre of the University of British Columbia along with a team of researchers from Italy and Chile. Equipped with the latest optical brain imaging techniques, the team recorded the brain activities of 22 newborns that were 2-3 days old. These babies were exposed to recordings of made-up words that end in repeating syllables like “mubaba” and “penana” as also words without repetition – such as “mubage” and “penaku.”

Gervain commented, “”It’s probably no coincidence that many languages around the world have repetitious syllables in their ‘child words’ – baby and daddy in English, papa in Italian and tata (grandpa) in Hungarian, for example.”

“The language centre of most right-handed adults is located on the left side of the brain. This is consistent with our finding with new born babies and supports our belief humans are born with abilities that allow us to perceive and learn our mother tongue systematically and efficiently”, he further revealed.

The researcher discovered that born with an innate ability to recognize these words, the human mind is tuned to decipher languages and also recognize certain patterns on repetition. The team also found that whenever repetitious words were played, there was a significant increase in the brain activities particularly the temporal and left frontal areas in newborns. No distinct response was found from the baby’s brain when non-adjacent repetitive words were played.

While earlier studies have focused more on how older children and adults acquire grammatical structures, this is one of the first studies that concentrates on a newborn infant’s innate ability to decipher structural patterns in language.

The current issue of the Proceedings of the National Academy of Science’s online Early Edition has published this study.