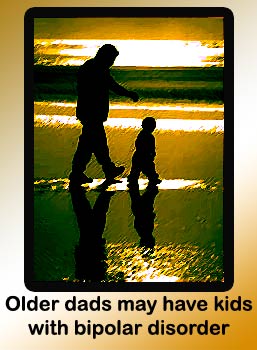 Here’s another condition that can be added to the list of problems associated with a father’s advanced age. Researchers say that children of older fathers are more likely to have bipolar disorder. This important discovery could explain the increasing number of people diagnosed with this condition.

The risk of bipolar disorder rises in men who are older than 29 before they starting a family and is the highest when they are over 55. The chances of offsprings developing this mental disorder may be upped in older dads. For the research, scientists analysed nearly 13,428, Swedish people with bipolar disorder along with severe mood disorder that causes repeated peaks of euphoria and hyperactivity followed by troughs of depression.

“Women are born with their full supply of eggs. Therefore, DNA copy errors should not increase in number with maternal age,” explained, Emma Frans, the lead researcher.

While having an older mother also increased the risk, the effects were less pronounced. Participants were controlled for factors like age of the individual’s mother, number of siblings and family history of mental health problems. In spite of these researchers found a distinct relation between father’s age and bipolar disorder.

Earlier studies have already linked increasing paternal age with schizophrenia and autism. Its association with bipolar disorder formerly called manic depression was unknown until now. The Swedish researchers suggest that ageing sperm may be explained as a cause of developing this condition. Men are capable of making new sperms throughout their adult life much unlike women who are born with all their eggs. This makes the sperm cells more erroneous due to DNA mutations as they undergo hundreds of replication cycles.

Published in the Archives of Psychiatry, the study thus concluded that the older an individual’s father, the more likely he or she was to have bipolar disorder.