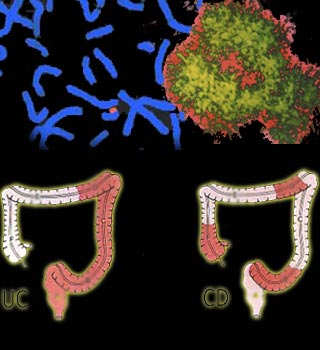 Innumerable people all over the globe are victims of childhood inflammatory bowel disease (IBD), a painful condition that includes Crohn’s disease and ulcerative colitis. A recent study by scientists has revealed two new genes that may be responsible for this painful condition.

Author of the study, Hakon Hakonarson, director of the Centre for Applied Genomics at Children’s Hospital, commented, “We will resequence the gene regions we have identified to pinpoint the causative mutations in these genes. We strongly suspect one gene will provide a compelling target for drug development, given what’s known about its biology.”

Co-first author Robert N. Baldassano, director of the Centre for Pediatric Inflammatory Bowel Disease at The Children’s Hospital of Philadelphia, additionally mentioned , “As we continue to find genes that interact with each other and with environmental influences in this complex, chronic disease, we are building the foundation for personalized treatments tailored to a patient’s genetic profile.”

Researchers from Children’s Hospital of Philadelphia carried out a genome wide association in DNA samples from nearly 1000 people who suffered from IBD since childhood. Trailing through the genetic code of these patients scientists were able to identify two new genes that could lead to IBD. The two gene variants were discovered on chromosome 20 and chromosome 21 respectively.

Of these the TNFRSF6B gene on chromosome 20 was found to be important because of its already known participation in the biological pathway of a protein called tumour necrosis factor (TNF). In TNF, researchers found plays a key role in the harmful inflammation characteristics of IBD. The scientists assert that these two genes can hence be added to list of genes that are already known to affect IBD.

The researchers however indicate that further analysis is needed to recognize the specific disease causing alterations in the new genes.

The study is published in the Nature Genetics journal.