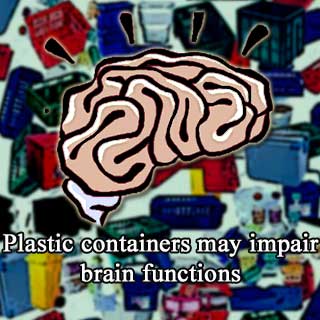 Here’s an alarming piece of news. Bisphenol A (BPA), a hormonally active chemical used in the manufacture of plastic containers and bottles is actually deadly for your brain. The latest study by US researchers has found that the chemical could be responsible in impairing many brain functions including learning and memory.

Conducted on monkeys who have a brain development similar to humans, the novel study shows the ability of BPA to alter brain functions by impairing learning and remembering things. The vaguely controversial chemical could also be linked to depression, Alzheimer’s disease and schizophrenia. African green monkeys at St Kitts Island were fed food having low levels of BPA for a month. The researchers interestingly found BPA to slow down the synapses in the brain.

Neil MacLusky, lead researcher mentioned, “Oestrogen enhances the rate at which some types of synapses are formed and is vital in maintaining normal neuronal structure in regions of the brain that control learning, memory and mood state. When monkeys had BPA in their system, it seriously impaired this process, affecting their ability to remember.”

Researchers at the University Of Guelph in Ontario and Yale University in Connecticut have discovered that BPA could be leaking into the solid or liquid foods in the plastic containers. The study reveals that even a low-level exposure to BPA had the ability to block certain types of synapses in the brain. Synapses are a tissue that allows neurons to communicate with each other. Improper development of synapses hampers the brain’s capacity to remember thoughts and experiences. These impairments are common in victims of depression and other brain-related ailments.

A chemical used globally, BPA plays a significant role in the manufacturing of plastic water bottles, baby food bottles, food containers and dental prostheses. On an average nearly three billion kilograms of BPA are produced each year which makes it one of the highest volume synthetic chemicals.