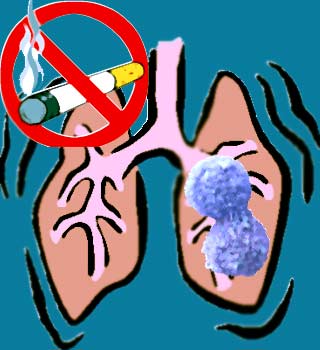 Ever wondered why some lifelong nonsmokers get lung cancer? Maybe you don’t really need to think so hard, a new study has made it simple. While major studies relate lung cancer with tobacco consumption, the new American research brings to light the 10 to 15% of lung cancers that are caused by factors other than smoking.

As part of the study, researchers analysed data on lung cancer occurrence among people who have never smoked in the course of their lifetime. Led by Michael J. Thun, M.D., the team analysed death rates among self-reported never-smokers from 13 large cohort studies based in North America, Europe, and Asia in a time period from 1960 to 2004. They also pooled data on lung cancer incidents which included thousands of individuals. The numbers were over 630,000 for the incidence data and 1.8 million for the mortality data.

The researchers commented, “Lung cancer is obviously a significant public health and medical problem, even beyond the overwhelming disease burden caused by tobacco smoking”

In addition researchers collected data from 22 registries of 10 different countries to examine the smoking patterns of women in regions known to have a low smoking prevalence. The study found that lung cancer death rates among never-smokers are highest among men, African Americans, and Asians residing in Asia. The largest review till date also revealed that the death rate among nonsmokers has been pretty much stable over the past decades.

The study discovered that the cases of lung cancer among lifelong nonsmokers were about equal to that of cancers of the brain and the nervous system. The mortality rate from lung cancer for men who reported to have never touched a cigarette was around 1.1% before the age of 85. The corresponding estimate for women was slightly lower at 0.8%. In comparison estimates of male and female current cigarette smokers at a risk of dying from lung cancer are nearly 22.1% and 11.9% respectively.

Though the report asserts that the number of nonsmokers contracting lung cancer has been stable over the years, the study still points out the importance of the disease.

The study is published in the journal PLoS Medicine.