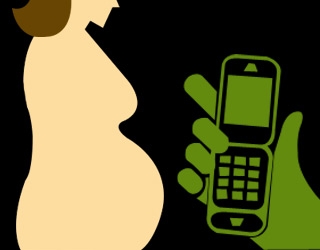 We had earlier reported why pregnant women need to keep their mobile away, well here’s another one. In case you are pregnant and still a heavy user of mobile phones-Beware! You could just be putting your child at a major behavioural risk. At least, that’s what a new research reveals. It says that mothers who use cell phones during pregnancy are highly prone to having kids with behavioural problems.

The research was led by Swedish scientists Professor Lennart Hardell of the University Hospital in Orebro and Professor Kjell Hansson Mild of Umea University. Focusing on the health hazards of mobile phones, the research claims that pregnant women who use handheld phones could be increasing the susceptibility of having children with problems like emotional and relationship difficulties along with hyperactivity.

“We strongly recommend the Government actively discourages mobile phone use by children, including making public advice leaflets readily available in NHS waiting rooms across the country. Research into monitoring health effects around mobile phone base stations is now urgently overdue and the Government should allocate funding for this for the protection of the general public” remarked Graham Philips, co-author of the study,.

Based on a review of 15 years of research into mobile phone health danger, the team asserts that pregnant women who are regular users of mobile phones had 54% increased chances of children with major behavioural issues as against pregnant women who didn’t use mobile phones. The amount of potential exposure to the radiation supposedly increases their likelihood. Additionally the research also shows that using cell phones on a daily basis for more than 10 years may up their risks of potential brain cancer.

According to the researchers a child’s brain absorbs radiation emitted from mobiles in greater proportions due to their skull formation. On comparing youngsters who had not been exposed to mobile phone radiations, the study found that kids exposed to phones prenatally and in early childhood were 80 percent more likely to develop behavioral difficulties.

Well the list doesn’t quite stop here. The scientists claim that radiation from mobile phones also affected young children whose mothers used a mobile phone around them. Researchers additionally warn that male fertility may also be deterred by heavy usage of mobile phones.

While there have been previous studies that showcase the effects of mobile phones on the brain and on biological processes, the new research may just add to the woes of cell phone users around the globe.

Published in the journal Occupational Environmental Medicine, the findings of the study have been presented at the Radiation Research Trust Conference, in London.