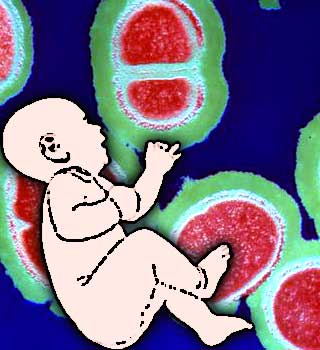 Sudden Infant Death Syndrome (SIDS) is known to kill nearly 250 babies in the UK. Though the exact cause is not yet identified, some cases of cot death may be due to bacterial infection related to MRSA according to a new research.

A new study by an Australian team relates a bacterial infection to the sudden, unexplained deaths of some babies in the first year of life. The research discovered that samples from babies who had died for no apparent reason often were carriers of Staphylococcus aureus. Widely known as MRSA strain, it is a particular virulent bacterium that becomes resistant to the antibiotic methicillin.

Led by Paul Goldwater from the Women’s and Children’s Hospital and the University of Adelaide, Australia, the study involved analysis of the post mortem reports of three groups of babies namely 130 babies who had died of SIDS, 32 who had died suddenly as a result of infection (SUDI) and 33 who had died of non-infectious causes such as a car accident.

Dr Goldwater, mentioned, “The finding of S. aureus in a normally sterile site in a large proportion of cases of SIDS would indicate that a proportion of these babies died of staphylococcal disease.”

Next, the group examined the bacterial isolates from sterile sites which are normally free of infections, such as heart, blood or spleen in all of the babies. Interestingly the study shows that infection at the sterile site was quite common with figures of one in five babies for those who died as a result of the infection. On the contrary for babies who had died of non-infectious causes infections at the sterile site were rare.

In addition, it was also discovered that infection was pretty common in babies who had died of SIDS. It was nearly one in ten babies. The Staph bacterium was identified to cause many of these infections. Previous studies have also confirmed a possible link between SIDS and the presence of the Staph bacterium.

Researchers are assuming that immune responses to bacterial infection and/or toxins may be creating something like a chemical storm, which can overwhelm a baby and lead to sudden death. Health Canada offers a few tips for parents to reduce the risks of SIDS. They include putting a baby to sleep on the back, avoiding too many clothes or covers on a baby and not smoking around the baby.

The study is published in the online edition of the Archives of Disease in Childhood.