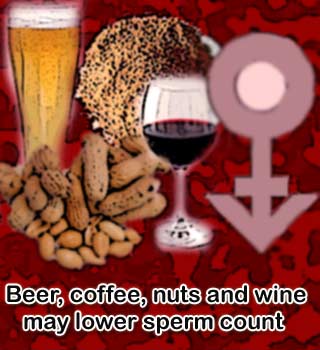 Every man’s pub favourites are guzzling beer and some nuts as accompaniment – Well may be you need to keep these out of your man’s reach now. Researchers have found that beer, wine, nuts and coffee all contain high levels of chemicals that may be related to male infertility.

The novel study was carried out by researchers at the Medical Research Council in Cambridge. It revealed that instant coffee powder, peanuts, brown ale, and red wine were particularly highly-charged with the sperm-sapping chemicals. These were found to be loaded with phytoestrogens, naturally-occurring plant compounds implicated in falling sperm counts. Apparently particular types of phytoestrogen, called isoflavones, which mimic the female sex hormone oestrogen, are to blame.

Researcher Gunter Kuhnle, commented, “The data we have collected has enabled us to put together an accurate table of which foods contain the highest levels of phytoestrogens, so we can look at the effect of long-term exposure, and work out what the safe levels are likely to be for humans.”

The researchers suggest that study surprisingly discovered that more food and drinks than previously thought contain the compounds. This recent study measured the levels of isoflavones along with a second oestrogen like chemical called lignan. Instant coffee powder, Brazil nuts, peanuts, brown ale and red wine showed significantly high levels of the chemical. It becomes really difficult for a man to aid in conception with low sperm counts.

A study published earlier had associated Soya with lowering sperm count in men. Additionally phytoestrogens, which also occur in large amounts of Soya, have been linked to fertility problems in livestock.

However, the researchers were unable to speculate the levels of these eatables that could affect health or fertility.

So snack at your risk. Rather it’s best to avoid those after-work dangerous halts!