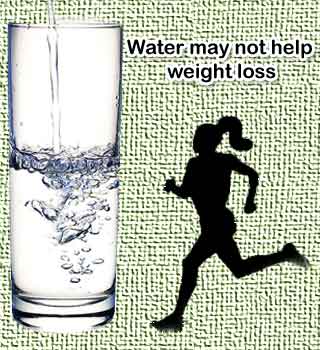 So all of you who were under the notion that drinking water will make you slim. Here’s some not so good news for you. The latest research by scientists at the University of Tokyo reveals that increase in water intake may not cut the flab and drinking water alone actually may not aid in weight loss at all.

According to researchers drinking Adam’s ale to lose weight could actually be a waste of time. Instead they suggest that those who want to lose weight should increase their intake of foods that have high water content. This includes fruit, vegetables, rice and soups.

Quoting in the Daily Mail the researchers remarked, “These studies suggest that when water is consumed as an integral component of a food, it promotes satiety and decreases subsequent dietary intake, thus possibly working to prevent obesity.”

The study involved an analysis of more than 1000 female dietic students in Tokyo. The participants were observed for dietary intake over a period of a month. With the help of questionnaires they were assessed for the consumption of different foods, alcoholic drinks and dietary supplements along with the cooking methods. Combining all beverages and the water content of different foods, an estimation of the average daily intake for a total of 150 food and drink items was taken.

Based on the comparison of the weight and waist size of the participants with the amount of water they consumed each day, both from drinks and food, the researchers concluded that only drinking water may not help in staying trim. In fact, the team of researchers found that women who consumed water-rich food had a smaller waist size in addition to a lower body mass index. Thus water taken in via food showed much better weight to height proportions.

On the contrary there was no association between water in drinks and body shape. The elixir of life in drinks like tea, coffee, soft drinks or fruit juices showed no effects on weight loss.

This relationship between water and weight loss was true even when factors like exercise and a women’s diet were considered. The researchers concluded these findings by looking at the individual dietary intake of the participants. They considered water rich foods to be better as these are higher in protein, carbohydrate, fibre and lower in fat which may help in staying slim. It could also be due to the fact that high fibre content in water rich foods may make people feel fuller after eating them.

This recent study is much in contradiction to an earlier study which suggested that people must drink eight glasses of water a day to stay healthy, slim and maintain a good skin.

This study is published in the journal Nutrition.

Over-seeing satiety cues in infants may lead to obesity