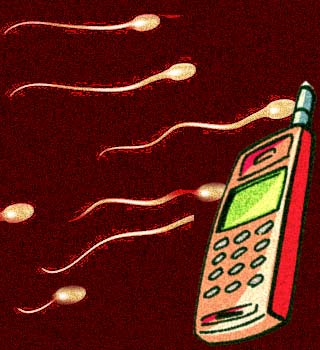 Incase you’ve got that mobile phone in your pocket and are in the network, here’s some cause for concern. Alarming as it may sound, a new study reveals that keeping your very trusted mobile phone in that safe pocket could in fact be making it the biggest enemy of sperms.

The research group revealed that men who make a lot of hands free calls from mobile phones in their pockets could damage their reproductive prospects as they may be killing their sperms by doing so. Led by Ashok Agarwal, the Director of the Center for Reproductive Medicine, the study was conducted at the Cleveland Clinic.

“We believe that these devices are used because we consider them very safe, but it could cause harmful effects due to the proximity of the phones and the exposure that they are causing to the gonads. The study results were sufficiently dramatic to attract extensive media attention, but additional research is necessary,” mentioned author Ashok Agarwal.

The team took the semen samples from 32 men who included 23 healthy men and 9 men with fertility problems for analysis in the laboratory. The men were then split into the control group and the test group. While the control group was kept away from cell phone emissions, they were subjected to the same conditions and temperatures as the test group. As part of the analysis, the researchers placed the sperms of the test group at a distance of 2.5 cm from a 850MHz phone in talk mode for an hour assuming this is the most commonly used frequency.

To their surprise the researchers found that in both the healthy and infertile specimens, 85% more free radicals were generated by the exposed sperm cells as compared to the control group. Antioxidants better known as chemicals that fight free radical damage were also found to be lowered by 6%. In addition both groups the healthy men and men with fertility issues showed a decrease of 7% in motility or movement of sperms along with 11% reduced viability also called as alive sperm as against the control group.

The researchers reveal that the study was actually conducted to investigate a previous study of around 361 men. The earlier research showed a noteworthy association between cellphone use and sperm quality, especially among men who used mobiles for more than four hours per day. They thus concluded that men who use earphones while on the go and keep their cellphones in their pockets or clip them to their belts could actually be posing increased risks to sperms.

The study is published in the Journal of Fertility and Sterility.