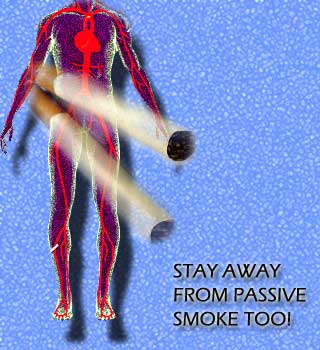 While you may not be the one enjoying a regular drag of that damned cancer stick, you could just do with staying away from those who do. A novel Chinese study claims that passive smoke could significantly increase the chances of Peripheral Artery Disease (PAD) in women.

In a first of its kind study, researchers found an eminent link between exposure to passive smoking and PAD. For the research experts defined secondhand smoke exposure as the condition of being laid open to another person’s tobacco for at least 15 minutes a day for more than one day per week for the at least two years in the past 10 years.

The study’s lead author and professor of epidemiology at the Chinese PLA General Hospital revealed “This is the first study to show the adverse effects of secondhand smoke on peripheral artery disease in women.”

“This study broadens the finding about the detrimental health effects of passive smoking on heart disease and stroke. Most people in China are unaware of the serious health hazards of passive smoking. It should definitely be discouraged by public health policy”, added Frank Hu, M.D., Ph.D., the study’s senior author and professor of nutrition and epidemiology at the Harvard School of Public Health in Boston, Mass.

The population-based study involved nearly 1,209 women from Beijing, China at an average age of 60 years and who had never smoked in their entire life. Of these women, nearly 39.5% had been exposed to passive smoke with a majority of 414 exposed to smoke at home and 63 exposed to it in the workplace.

The researchers examined the volunteers for an association between passive smoke and PAD with mainly two measures in mind- indication of intermittent claudication and ankle brachial index. The first condition is a clinical diagnosis of muscle pain mainly in the calf muscle area especially during exercise and seemed to be relieved by a short period of rest. The second is a test that measures the ratio of systolic blood pressure at the ankle and the arm, thus calculating the index of each leg.

According to the researchers, nearly 431 prevalent cases of CHD, 172 cases of ischemic stroke and 271 cases of PAD were discovered. They thus found a 67% increased risk of PAD in those exposed to secondhand smoke compared to those who were not exposed. The authors suggest that most studies have revealed the adverse affects of both active and passive smoking which are not very different among the Western and Asian population.

In addition to this the researchers pinpoint that though the study does not conclude harmful effects of passive smoke on men, it is quite possible for men to have the same injurious effects.

The study is published in the Circulation: Journal of the American Heart Association.