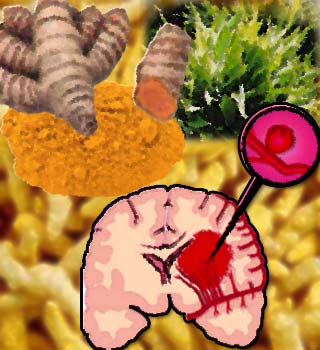 An essential and widespread part of the Indian culture, the spice turmeric or curcumin has been used in Asian cookery for thousands of years. Besides evoking associations in weddings and other auspicious occasions, the bright yellow spice is also quite famous for its medicinal properties that include lowered chances of cancer, Alzheimer’s and also quick healing of wounds.

The universal spice has yet other addition to its medical potency. It has now been found to reduce the size of the blood clot in hemorrhagic stroke, a medical condition in which vessels within the brain start bleeding. Turmeric is a rhizomatous herbaceous perennial plant Curcuma longa of the ginger family.

This novel discovery was made by US scientists at the Medical College of Georgia. Brainchild of Indian-American scientist Krishnan Dhandapani, neuroscientist at the MCG School of Medicine, and a second year medical student Jay McCracken, the research showed that an ingredient in the deep yellow spice turmeric can be a boon for patients who often do not know they have had a stroke.

Dhandapani, remarked, “Usually, patients can experience other symptoms like seizures, vision or cognitive problems, so they come to the emergency room fairly quickly under most circumstances. Many patients also arrive due to head trauma and are seen within an hour or so. However, treating these injuries, even after an hour, can be tricky.”

Equipped with animal models, the researchers determined the effects of turmeric on intracerebral haemorrhages (ICH). They dissolved a powdered form of the warm and aromatic spice with bitter undertones in corn oil. It was then injected into the abdomen of an animal model of hemorrhagic stroke three times over a period of three hours. They found that turmeric significantly lowered the size of the blood clot in these animal models.

Researchers additionally mentioned that timing is very important for patients as many a times they are not aware of a stroke. Additionally those who do visit the physician for this type of stroke are treated for symptoms like headache and nausea. According to American Stroke Association, nearly 17% of strokes are hemorrhagic and mostly develops in people with high blood pressure.

The researchers are still working on the optimal dose and timing of the spice. They suggest that less amount of turmeric may work and it may have to be administered intravenously. Along with this researchers are also looking at the possibilities of making it available in a concentrated tablet form for those at-risk of strokes.