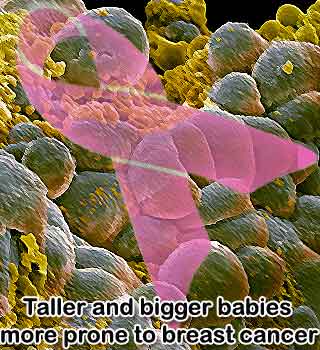 A global study of more than 60,000 women reveals that baby girls who are born taller and bigger than average have high chances of developing breast cancer. Researchers suggest that larger than average weight and height makes these babies more vulnerable to the most common type of cancer among women.

The research was carried out by a team of researchers at the London School of Hygiene and Tropical Medicine. The analysis involving nearly 32 studies goes on to reveal that for every extra 2m increase in length or extra pound at birth, a woman’s chances of developing the deadly cancer is increased by 6%.

Researcher Professor Isobel dos Santos Silva, commented, “Our study indicates that birth size is a marker of susceptibility to breast cancer in adulthood, at least in developed countries. Little is known on how the prenatal environment may affect breast cancer risk in later life. Further research is needed.”

“Breast cancer is a complex disease that can be influenced by many factors throughout a woman’s life. We don’t yet know what all of these factors are, so it is very interesting that birth size may be one of them.” added Dr Sarah Cant of Breakthrough Breast Cancer.

A close examination by the researchers has shown a strong link of birth weight, length and head circumference to breast cancer. They found an estimated 7% increased risk of breast cancer for a 0.5kg increase in weight. Women who measured more than 51cm in length at birth had 11.5% chances compared to 100 of those who had measured less than 49cm (19.3in) who showed 10% chances of developing the cancer.

The researchers are trying to establish a link between cancer and the environment of the baby before birth. They suggest that it is quite possible that a larger baby may be exposed to more oestrogen and other hormones in the womb. Other factors that were considered for the study were a woman’s weight in adulthood, consumption of alcohol. The analysis however showed a clear association between a woman’s weight at birth and their odds of developing the disease later in life.

The scientists are optimistic that this better understanding of the biology could help them develop novel drugs to beat the disease. An estimated 12,400 women are killed by this fatal form of cancer. In addition it is known to affect around 46,000 women in the UK every year.

These findings appear in the PLoS Medicine reports.