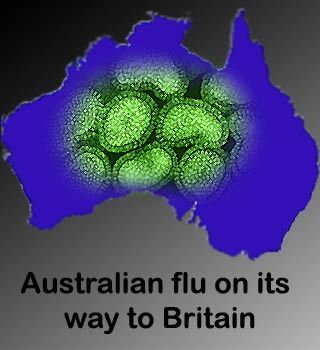 The fatal Australian flu virus that has killed nearly hundreds of people may strike Britain this winter. Health officials have apparently changed the flu vaccination as they fear the Brisbane H3N2 virus strain from Australia is now headed towards the northern hemisphere.

Professor Bruno Lina, head of the National Influenza Centre in Lyon, France, reveals, “The upcoming season is notable in the sense that among the three new vaccine strains there is one that has proved to be very virulent in Australia. This further reinforces the importance to comply with health authorities’ recommendation for seasonal flu vaccination.”

“Preventing and treating flu is a serious issue, and the NHS is well-prepared. Seasonal flu vaccination is available free to everyone in the at risk groups. England’s seasonal flu vaccination programme has one of the highest uptake rates in Europe. In 2006/7, 74 per cent of people in the over 65 group were vaccinated. We urge people and children at risk from the effects of flue to get a flu job every year”, added a spokesman for the Department of Health.

The virulent flu strain affects three times the number of victims as compared to those hit by other strains. Most of the deaths in these cases are due to pneumonia. More than 800 deaths from pneumonia were reported between June and July 2007 in New South Wales.

Like most viruses, the Brisbane virus is also known to follow a particular pathway. The viruses from the southern hemisphere are active in the winter months, our summer, and tend to be transmitted north before the end of our winter. Though the Brisbane H3N2 did not follow such a pathway last year, the World Health Organisation is still taking precautions in case it travels to Europe this year.

Common symptoms of the flu include fever, tiredness, dry cough, sore throat, nasal congestion and an aching body. The latest flu vaccine is a distinct combination of Brisbane strain with two others; reveal The WHO and Sanofi Pasteur, a vaccine manufacturer. The make-up of the vaccine has been changed as the flu strain was found to be highly destructive.

Everyone over 65 in Britain is given the flu vaccination. It is also administered to ones who take care of the elderly or disabled and those with conditions like asthma and heart disease.