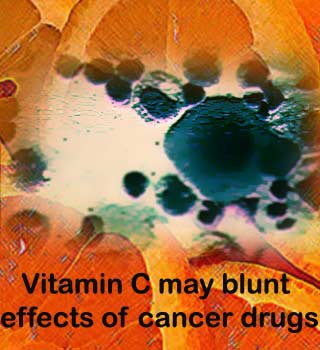 Here’s some unheard of and quite surprising news. Researchers at the Memorial Sloan-Kettering Cancer Center reveal that vitamin C could significantly reduce the benefits of a number of anticancer drugs.

Cancer patients who take vitamin C supplements have been warned that they could strangely be hampering their treatment therapy. Apparently the involvement of vitamin C halts the effectiveness of chemotherapy drugs.

Cancer drugs work by producing molecules called oxygen free radicals which are capable of reacting with other molecules in the cancer cell, in turn causing its destruction. So theoretically even after rounds of chemotherapy, the cancer cell may be kept alive by vitamin C that could be clearing up the free radicals.

“Vitamin C appears to protect the mitochondria from extensive damage, thus saving the cell and whether directly or not, all anti-cancer drugs work to disrupt the mitochondria to push cell death. The use of vitamin C supplements could have the potential to reduce the ability of patients to respond to therapy,” mentioned lead researcher Dr Mark Heaney.

Revealing that the study was interesting and at an early stage, Dr Joanna Owens, of the charity Cancer Research UK, remarked, “As yet, there is not enough evidence to know whether antioxidants such as vitamin C are helpful or harmful during cancer treatment. It is possible that high doses of antioxidants can make treatment less effective, but until we know for sure our advice is to try and get the vitamins you need through a balanced and varied diet rather than through vitamin supplements.”

The team of US researchers conducted tests to examine the effects of a particular type of Vitamin C on a wide array of anti-cancer drugs. The effectiveness of these drugs was tested on cancer cells in laboratory mice. A quantity of Vitamin C equivalent to that found in high dose supplements was used in this study. The researchers were quite surprised to discover that if cells were pretreated with vitamin C, every drug they tested did not work as well as they did on untreated cancer cells.

Based on the tested drug, nearly 30% to 70% less treated cancer cells were killed. In addition to lowered effects on cancer cells, the scientists also found that in mice that were given cancer pretreated with vitamin C the tumours grew more rapidly. This was revealed after follow-up tests that were carried out on the mice. In contrast chemotherapy seemed to keep untreated cancer in check. The researchers suggest that vitamin C may not actually function as theoretically assumed.

On the contrary, the nutrient seems to protect tiny structures inside the cancer cells called mitochondria from damage. Mitochondrion is the powerhouse of a cell and its damage causes a cell to die. These findings are in fact quite in contrast to some studies that indicate that vitamin C as an antioxidant it could be beneficial to cancer patients.

According to researchers of the current study however vitamin C was probably good for cells in normal tissue. Its protective effect may actually be completely counter-productive in relation to cancer cells. They further mention that though no inferences can be drawn from the study it does show that Vitamin C blunts the effects of the anticancer drugs.

The research is published in the October 1, 2008 issue of the journal Cancer Research.