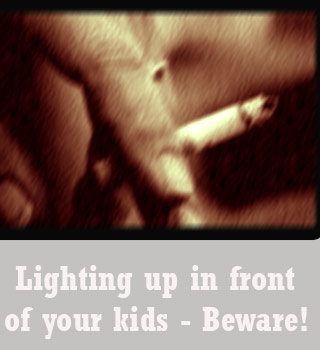 Here’s an alarming piece of information for parents who smoke. Smoker’s children have high chances of becoming nicotine addicts because of the passive smoke. That’s right-Every time you light up that cancer stick, you are not only harming yourself but also inducing nicotine dependence in your kids.

Speaking about the study, lead researcher Dr Jennifer O’Loughlin from the University of Montreal, commented, “Our study found that 5 per cent of children who had never smoked a cigarette, but who were exposed to second-hand smoke in cars or their homes, reported symptoms of nicotine dependence. These findings support the need for public health interventions that promote non-smoking in the presence of children, and uphold policies to restrict smoking in vehicles when children are present.”

For the study nearly 1800 children from 29 Quebec schools aged between 10 to 12 years were analysed. The children came from different socioeconomic levels and were asked to fill up questionnaires regarding their health, behaviors and exposure to smoke. Surprisingly nearly 5% of the 1,488 children who never touched a fag but were constantly exposed to passive smoke showed the common symptoms of nicotine addiction.

Among the children who had never smoked but had parents who were regular smokers, the research found symptoms like depressed mood, trouble sleeping, irritability, anxiety, restlessness, trouble concentrating and increased appetite- all associated with nicotine addicts.

Researchers say that though the smoking parents may be ignorant and find the research illogical, a significant link exists. They warn parents who smoke that they may be fostering nicotine dependence in their non smoking child. Experts advice parents to keep away from cigarettes in places they shared with their family, that’s obviously if they want to protect their children.

While earlier researches have confirmed the effects of passive smoke among non smoking individuals, the current study further aims at reminding people the harmful consequences of second hand smoke, especially to growing children.

The September edition of the journal Addictive Behaviors features the findings of this study.