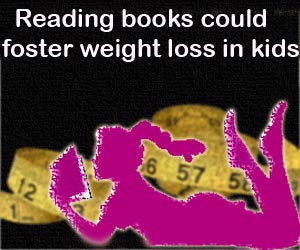 ‘A library is a hospital for the mind’ goes a quote. It could have a literal meaning especially if your child is overweight. In case your kid needs help in shedding those extra pounds; a book with a subtle message of good health could be of great benefit. At least that’s what a new study reveals.

In a rather unique study led by Alexandra C. Russell, MD, a fourth-year medical student at Duke University, experts found that obese girls who read books with a weight management storyline as the backdrop had better chances of controlling their weight as compared to those who did not.

“This is the first prospective interventional study that found literature can have a positive impact on healthy lifestyle changes in young girls. The two most effective obesity medications on the market, (Orlistat and Meridia) are not approved for children under age 15, and surgical treatments such as gastric bypass are often too risky for kids,” remarked Sarah Armstrong, a pediatrician and director of Duke’s Healthy Lifestyles Program.

She further adds “It is encouraging because it’s fairly easy to implement. And it’s a welcome addition to a world where there aren’t a lot of alternatives. It’s a win-win situation; after all, there are few negative side effects to encouraging kids to read.”

For the study researchers from the Duke Children Hospital enrolled nearly 81 severely obese girls between 9 and 13 years of age in a weight management program. While 31 girls were asked to read a novel called Lake Rescue in which the protagonist is an overweight preteen struggling with many confidence issues, 33 girls were asked to read another book called Charlotte in Paris with no weight management storyline. The remaining 17 girls read neither book.

A follow-up of six months led the researchers to discover that the girls in the first group that’s the Lake Rescue readers showed a noteworthy loss of weight and much better BMI scores as against the other two control groups. For the Lake Rescue readers, the BMI lowered by 0.71 while the Charlotte reading group reported a BMI lowered by 0.33. On the contrary non readers showed a 0.05 increase in the BMI.

Obesity these days is like the sword of Damocles for children. Nearly 16% of American children aged between 16 to 19 years are either overweight or obese. Researchers are hence constantly in the search of different ways to tackle this issue, hoping to help kids stay healthy and lose weight.

The study was presented at the Obesity Society’s annual scientific meeting held on October 4, 2008.