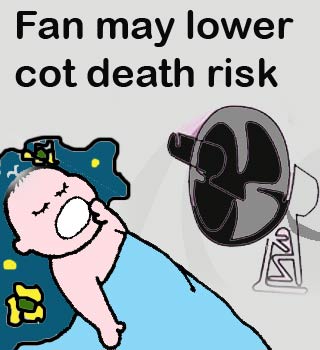 Now here’s some interesting piece of news. American researchers claim that keeping a fan on while the infant is asleep could significantly lower cot death risk. You heard it right! Apparently the fan improves air circulation and reduces the temperature around a baby lowering the risks of cot death by nearly 94%.

According to Professor George Haycock, scientific adviser at the FSID, “There’s no evidence published in this paper to indicate that, if you are following existing recommendations, using a fan would provide extra protection.”

Conducted by US scientist at the Kaiser Permanente Division of Research in Oakland, California, the study suggests that the risk of cot death can be dramatically reduced by keeping the baby in a room with the fan on. The research involved an analysis of nearly 185 mothers whose children had died of Sudden Infant Death Syndrome (SIDS) and 312 randomly selected mothers from California, of the same race, ethnicity and age.

These women were interviewed to ascertain the lifestyle of their babies. The researchers were surprised to find that for babies who slept in a room with the fan on, the risks of dying from SIDS was lowered by nearly 72%. In rooms with warmer temperatures, somewhere more than 20.5C, the use of fan showed 94% lowered chances of SIDS.

The researchers additionally compared babies who had died from SIDS to babies who had not died from SIDS. In comparison more infants who died from SIDS were placed on their stomach or sides nearly 68.9% to a 43.9%, the babies did not use a pacifier nearly 95.9% compared to 76.4%, they slept with bedding or clothing covering their head nearly 11.4% as against 4.5%, slept on a soft surface about 12.1% versus 6.8% and were also found to share a bed with someone other than the parent nearly 14% compared to 5.5%.

The findings suggest that using a fan circulates fresh air lowering the risk of breathing in exhaled carbon dioxide subsequently reducing the chances of dying from SIDS. Doctors mention that parent’s need not worry about the fan chilling the baby as a fan only moves the air and doesn’t actually chill it. A baby will feel cold only if he/she is perspiring. While no particular reason for the illness has been recognized, SIDS is known to kill nearly 300 infants in Britain every year.

The study is published in the Archives of Pediatrics and Adolescent Medicine.