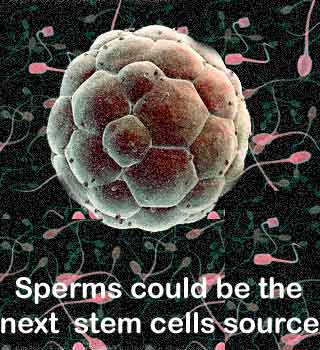 If you thought a man’s testicle are simply capable of producing sperms, think again! Human’s we must say have achieved mastery over technology with scientists now having discovered a novel way to create human stem cells from a man’s testicles. We are left in a lurch if it can actually conquer the embryonic stem cell complications.

According to researchers from Germany, sperm cells can be converted into stem cells to grow into muscles, nerve cells and other kinds of tissue. Diseases such as diabetes and Parkinson’s have been found to be treated by stem cells by replacing damaged or malfunctioning cells with custom-grown replacements.

Dr Thomas Skutella, who led the study at the Centre for Regenerative Biology and Medicine in Tuebingen, Germany, mentioned, “The advantage these cells have in comparison to embryonic stem cells is that there is no ethical problem with these cells and that they are natural.”

As part of the research scientists obtained the biopsy samples of the spermatogonial cells in 22 men aged between 17 and 81 years. The researchers then extracted the sperm precursor cell, a type of adult stem cells with a fixed role to become a sperm cell. These individual testicular cells were cultured in laboratory dishes and after about three weeks it was found that some of the cells formed colonies resembling embryonic stem cells.

Sabine Conrad of the University of Tuebingen in Germany, co-author in the study revealed that these cells are in fact theoretically superior to traditional embryonic stem cells because they can be obtained directly from male patients and can be useful in growing replacement tissue that their own bodies won’t reject. Another advantage of the cells is that they do not require the destruction of human embryos.

Earlier scientists have been successful in obtaining flexible adult stem cells from skin, amniotic fluid and menstrual blood. However the researchers additionally mention that the DNA in the stem cells are short of some important modifications that are found in normal cells and further test are needed to see the behaviour of these cells if these changes are altered.

These findings are published in the journal Nature.