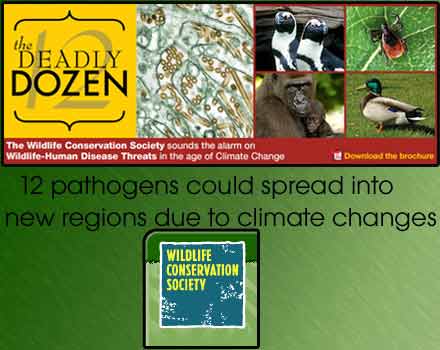 Don’t we feel the summer getting hotter each year and the winter getting colder? Certainly moving towards rapidly changing climatic conditions, these changes among other hazards are also causing some harm to our health. They apparently bring with them a range of deadly diseases.

A new report released this week by health experts from the US-based Wildlife Conservation Society (WCS) reveals that higher temperatures and rainfall due to global warming may cause the spread of 12 deadly diseases into new regions around the world, raising the danger to humans and animals.

Making it clear, WCS President and CEO Dr Steven E Sanderson remarked, “The health of wild animals is tightly linked to the ecosystems in which they live and influenced by the environment surrounding them, and even minor disturbances can have far-reaching consequences on what diseases they might encounter and transmit as climate changes. Monitoring wildlife health will help us predict where those trouble spots will occur and plan how to prepare.”

Warning that climate changes will give birth to a range of deadly dozen animal borne diseases, the report goes on to say that these diseases will pose great threat to human as well as animal life. The report lists 12 diseases that are most likely to outbreak as a result of changes in temperature and rainfall. They include avian flu, Ebola (and its cousin Marburg), cholera, tuberculosis, yellow fever, rift valley fever, Lyme disease, and a range of parasites.

Revealing about the harmful effects of climate induced changes; the distinct report also mentions that pathogens affecting wildlife have already destabilized trade and caused financial damage, including an estimated $100 billion in losses to the global economy.

According to the authors tracking the reason for the diseases shift through wildlife populations by setting up a global surveillance network based on a mix of Western science and the knowledge of indigenous people is the best way to protect ourselves against worst possible scenario.

Around the world the movements of avian influenza through wild bird populations is monitored with the help of an international consortium led by WCS. Created in 2006, the Global Avian Influenza Network for Surveillance (GAINS) includes dozens of private and public partners that keep a tab on global wild bird populations for avian flu.

Called the Deadly Dozen: Wildlife Diseases in the Age of Climate Change, the report will be presented at the International Union for Conservation of Nature (IUCN) World Conservation Congress in Barcelona, Spain.