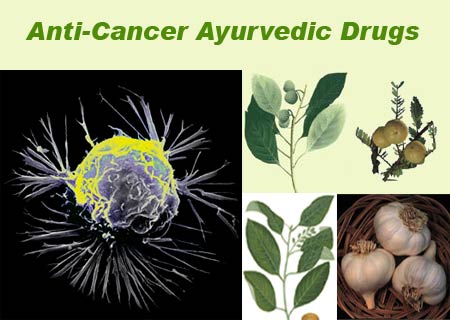 The nomenclature and classification of diseases has kept on changing as per our understanding and diseases evolution. The word cancer has been introduced in modern science only a decade ago. Naturally one can not expect to find the exact synonym of word cancer in ayurvedic texts, but a very near word called ‘ARBUDA’, meaning tumor appears in the vedic literature.

There is one more word called ‘SUDHTA VARNA’ meaning malignant ulcer is also described in the vedic scripture. In addition, special names are given to various cancers, depending on the site of origin e.g., valaya, balasa, shataghni and mansatana are the names of some cancers of throat. Yonikanda is the name of vaginal or cervical tumor or cancer. Sannipatika pandu includes leukemia.

The word ARBUDA literally means mountain, which is a tumor like elevation on the surface of earth. It is divided into:

Of these vataja, pittaja, and kaphaja and medaja arbuda are benign tumors and are treatable. Raktarbuda is highly vascular tumor which bleeds easily and occurs due to vitiation of blood i.e., rakta and kapha. Raktarbuda and mansarbuda are malignant tumors and are incurable. Raktarbuda is highly vascular tumor and usually associated with anemia because of its natural tendency to bleed. It includes many sarcomas described in modern medicine.

Mansarbuda – it is a stony hard, painless, immobile swelling without inflammatory signs. Depending on its site of origin various types of arbudas are described. The tumors are also named according to the organ affected as follows:-

Aetiopathogenesis of cancer according to Ayurveda:

1) Shodhanatmaka – diseases like diarrhea, vomiting, cough with expectoration e.g. bronchitis where in toxins are thrown out of body. These diseases tend to cure naturally.

2) Pachanatmaka – diseases like fever, where the toxins are digested and neutralized by body.

3) Sanchayatmaka – where the toxins or etiological agents keep on accumulating in the body and start the disease process. Arbuda, granthi and cancer belong to this group of diseases. Here there is unnatural, uncontrolled, unwanted, purposeless growth of tissue. Example: In medarbuda – fatty tissue shows uncontrolled growth others are Osteoma, osteosarcoma.

Causes of cancer as per Ayurveda:

Ayurveda has described the following causative factors which lead to cancer.

1. Hereditary – cancer of breast, uterus, colon and retina are hereditary.
2. Diet – excessive dietary intake, eating sweet food items in excess, eating meat, particularly meat of cow, buffalo or fish in excess, consumption of incompatible diet like eating sour fruits with milk, fish with milk, eating diet against ones constitution., eating stale, putrefied, fermented food in excess, eating in excess, pungent, sour or very hot items.
3. Activity – over exertion or too much rest, sex in excess.
4. Suppression – of natural urges like passing stool, urine, or cough may lead to cancer of the colon, prostate or bladder and lungs respectively.
5. Injury or chronic irritation – recurrent injury or irritation to any organ leads to cancer e.g. denture which is not fitting may lead to cancer of gums.
6. Environment – temperature, humidity, pollution, may predispose to develop certain leukemia. Polluted air predisposes to cancer of lungs. Excessive humidity may lead to kaphaja type of cancer.
7. Addiction – like smoking predispose to cancer of lungs, consumption of alcohol predisposes to cancer of stomach and liver.
8. Iatrogenic – unskilled and repeated use of Panchkarma, administration of wrong medicines for long time.
9. Occupation – working in an asbestos factory or chemical factories predisposes to cancer of lungs.
10. Obstruction, constriction or dilation of various body channels.

Pathogenesis of cancer as per Ayurveda:

The causative factor vitiates vata, pitta and kapha with rakta, mamsa dhatus. These vitiated doshas and vitiated dhatus gets localized in skin, muscular tissue or other organs and leads to localized swelling. The swelling is large and grows fast. Usually immobile and does not suppurate. Such a tumor is called as ARBUDA. Kapha dosha is dominantly increased in all tumors.

Vataja arbuda: here there is predominance and increase in vata dosha.

Treatment of vataja arbuda according to Ayurveda:

1) Swedan – means induction of sweating locally. This can be done in various ways like,

a) Milk or kanji medicated with bala, nagabala, kakoli, ksheer-kakoli, ginger, pepper and pippali should be drunk.
b) Til (Sesame) or cows ghee (Clarified butter) medicated with nishottara should be given by mouth.

Pittaja arbuda: here there is predominance and vitiation of pitta dosha.

Treatment of pittaja arbuda according to Ayurveda:

4) Ghee medicated with trivrut, dried black grapes and satala should be administered orally.

Here, there is predominance and vitiation of kapha dosha.

1) Emetics – vomiting should be induced by giving madanaphala powder with a decoction of yashtimadhu.
2) Purgatives – like triphala, danti, nishottar should be given.
3) Blood letting- by application of leeches.
4) Application of paste locally to tumor:

If maggots are formed in the tumor, apply paste of cooked peas, kulattha, til, meat and supernatant water on curds. The maggot comes out to eat the paste and flies don’t alight on the tumor. The paste should be washed out. Later the tumor should be excised surgically and Band-Aid. After bandaging yavakshar should be applied locally. After surgery, the wound should be cleaned by decoction of leaves of saariva, jaati and
karaveera. Application of til oil medicated with bhargi, vidanga, triphala and patha helps in healing of the wound.

Here there is vitiation of adipose tissue that is meda dhatu.

Treatment of medarbuda (lipoma) according to Ayurveda after local fomentation, the medaja arbuda should be excised surgically and the wound sutured after the bleeding stops. The wound should be cleaned with a paste prepared by triturating fine powders of turmeric, smoke on the walls, lodhra, red sandalwood, manasshila and hartal in honey. For healing, karnja oil should be applied locally.

Sharkararbuda: The increased kapha and vata molecules vitiate muscular tissue, fatty tissue and walls of vessels and give rise to granthi or swelling. After the swelling ripens it discharges foul smelling secretions of different colors resembling honey, ghee, or fat. After the discharge is over, the weak muscular tissue forms small nodular swelling resembling accumulation of sugar particles. The word sharkara means sugar, hence the name sharakararbuda is given to this tumor. The treatment is same as that of medarbuda.

Raktarbuda: The increased vata, pitta and kapha doshas vitiate the blood and blood vessels and surrounding tissues which lead to appearance of swelling. The tumor discharges blood stained secretion very fast and is incurable. Many types of sarcomas are included in raktarbuda.

1) Blood letting by leech application
2) Local spray of milk and water is useful
3) Cold decoction of kakoli group of medicines with sugar should be sprayed over the wound.
4) Powder of haritaki may be administered with grape juice or sugarcane juice
5) Paste of bark of madhuka, jambhu (jambun), arjuna and vetasa should be applied locally.
6) Ripe granthi should be removed surgically and the wound should be washed with decoction of skins of pippal, gular etc and banyan paste of til and yashtimadhu and ghee medicated with madhura group of medicines like kakolyadigana should be applied locally.

Mansarbuda: repeated injury to muscles as in boxing vitiates the vata, pitta and kapha doshas in muscular tissue and gives rise to swelling termed as mansarbuda the tumor is painless and very hard like a stone. It does not suppurate. People eating meat are more likely to suffer from the disease. The disease is incurable. Development of another tumor over the first tumor is known as adhyarbuda. Two tumors appearing nearby i.e. adjoining each other either simultaneously or one after another is known as dwirarbuda.

Other useful medicines in tumors are