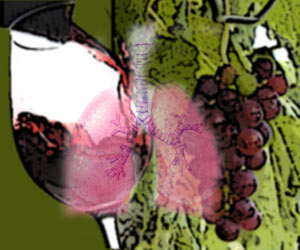 Previous studies have highlighted the health benefits of red wine that include benefit to the heart and also improvement in circulation. A research now finds that in moderate quantities the French drink may also protect you against lung cancer.

Conducted by US researchers, the study suggests that an antioxidant component in red wine has the potential to decrease the risk of lung cancer in men, especially among people at high-risk like smokers. Alcohol is normally associated with addiction; however many studies have shown that moderate quantities of alcohol may actually do more good than cause you harm.

Lead researcher Dr. Chun Chao of Kaiser Permanente Southern California in Pasadena, comments, “An antioxidant component in red wine may be protective of lung cancer, particularly among smokers. Red wine is known to contain high levels of antioxidants. There is a compound called Resveratrol that is very rich in red wine because it is derived from the grape skin. This compound has shown significant health benefits in preclinical studies.”

As part of the research, Chao and colleagues gathered data through the California Men’s Health study linking clinical data from California’s health system with self-reported data from 84,170 men aged 45 to 69 years. 210 subjects part of the study developed lung cancer between 2000 and 2006. The researchers then measured the effects of beer, red wine, white wine and liquor consumption on the risk of lung cancer.

Taking into account factors like influence of age, education, income, exposure to second-hand smoke and body weight among other relevant factors, the researchers discovered that on average, a 2 percent lower risk of lung cancer was associated with each glass of red wine consumed per month. They additionally discovered that the most significant risk reduction was for men who smoked. They had a less likelihood of developing lung cancer if they consumed one or two glasses of red wine a day.

Acting as a protecting ingredient, a polyphenolic compound called Resveratrol was identified by researchers in red wine. The ingredient is found in the skin of red grapes and hence in red wine. It is the same compound that is responsible for lowering cardiovascular illnesses in worms, fruit flies and yeast.

A 60 percent lowered chance of developing lung cancer was found by the researchers for male smokers as against those who did not smoke daily and didn’t consume alcohol. Researchers however mention that the chances of lung cancer are reduced only on consumption of red wine and not any other alcoholic beverage, not even white wine for that matter. They also caution that the ideal way to lower the risk of developing lung cancer is completing getting off the habit of smoking.

Experts associated with the study assert that even smokers who drink one or two glasses of red wine per day have a higher lung cancer risk than nonsmokers. So in case smokers think consuming just red wine will lower their risks, sorry to disappoint you.

The study is published in the Cancer Epidemiology, Biomarkers and Prevention, a journal of the American Association for Cancer Research.