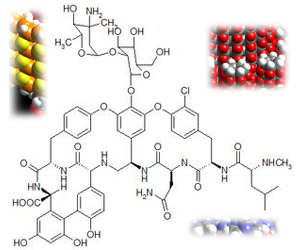 Researchers are now turning to nanotechnology in search for antibiotics. Scientists at the London Centre for Nanotechnology (LCN), University College of London (UCL) are now working on the nanochemical, Vancomycin to battle out superbug infections including Methicillin-Resistant Staphylococcus Aureus (MRSA).

Led by Rachel McKendry and Gabriel Aeppli, the team of researchers used the novel approach to inspect the way antibiotics function. They found that compared to other common antibiotics, Vancomycin gives much better results in fighting all kinds of bacteria including both resistant and non-resistant varieties.

“There has been an alarming growth in antibiotic-resistant hospital superbugs such as MRSA and Vancomycin-resistant Enterococci (VRE),” reveals Rachel McKendry. “This is a major global health problem and is driving the development of new technologies to investigate antibiotics and how they work.”

To analyze the working of various antibiotics on bacteria, researchers used ultra sensitive probes, the cantilever arrays which are extremely thin and sensitive. These probes were fastened with mucopeptides from the bacterial cell wall to see what really happens when the cell wall of the bacteria is attacked by the antibiotics inside the human body. Mucopeptides are polymers in bacterial cell wall.

An examination of the reaction of Vancomycin on the bacterial cells showed that mucopeptides are attacked by the antibiotic. Mucopeptides were found to attach themselves to the bacteria causing the surface to stress. This was reflected by the slight bending of the levers of the probe. This stress causes the cell wall of the bacteria to ultimately break and destroying the cell and thus fighting the infection.

According to the scientists, superbugs have a very simple and small deception, which helps them disrupt the effect of antibiotics. These bugs are found that mutate by deleting one hydrogen bond from the polymer structure in their cell walls and hence making it much more difficult for the antibiotics to destroy them. However a detailed study of Vancomycin showed that in comparison to other antibiotics, it was far more capable in weakening the cell walls of these bacteria and to ultimately kill them.

Based on these findings, researchers are hopeful of making way for the development of more effective drugs in fighting bacterial infection.

Funded by EPSRC (Speculative Engineering Programme), the IRC in Nanotechnology (Cambridge, UCL and Bristol), the Royal Society and the BBSRC, this interesting research is published in the Nature Nanotechnology.