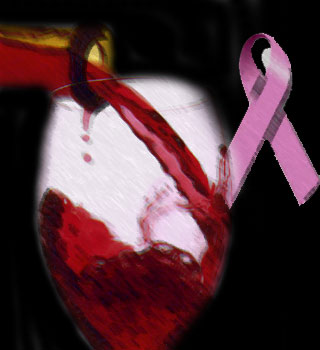 Women who enjoy their regular dose of alcohol-Beware. It now appears that you are actually not all out there about the threat alcohol poses for your health. So in case you are spaced out about this one, we’d like to bring to your notice a recent finding that suggest that just one glass of wine and you increase your chances of breast cancer by a fifth.

Well we’d all heard about the health benefits of red wine, but these findings are quite alarming. Alcohol consumption in general however has been associated with breast cancer for many years, though most women may be oblivious to this fact.

According to Dr Sarah Cant, Policy Manager at Breakthrough Breast Cancer, “Drinking moderate or high levels of any type of alcoholic drink has many health consequences, including an increased chance of developing breast cancer. Although many factors might affect our risk of getting breast cancer, limiting how much we drink is one thing we can do to try to reduce that risk – it’s never too late to change your drinking habits.”

Public Health Minister, Dawn Primarolo, further adds, “It’s shocking, even for me, to see the potential risks of drinking over recommended guidelines in black and white. One large glass of 12 per cent wine takes a woman to her recommended daily limit in just one drink for regular drinking. Knowing the potential health consequences enables women to make choices that can reduce their risk of developing breast cancer.”

The YouGov survey, a part of the UK Governments the Know Your Limits campaign, the research suggests that eight out of ten women are in fact caught napping about alcohol being a breast cancer risk factor. Nearly most of the women were under the impression that alcohol consumption can only cause a liver disease or liver cancer. The survey involved nearly 2000 men and women and revealed that an estimated four million UK women drink more than recommended levels that are about two to three units a day.

The study goes on to unearth that when drinking and non-drinking women are compared, those in the former group are increasing the chances of breast cancer with every additional drink consumed. So those who gulp down three units of alcohol a day increase their susceptibility by a fifth while two large glasses makes you three times more likely of developing the cancer and nine units a day increase your risks by 50%.

With more than 45,000 new cases of breast cancer in the UK every year, the Government analysis warns women to wake up against the serious risks alcohol brings in terms of breast cancer. The review brings to light the fact that most women assume the commonest cause of breast cancer to be genetic. Though true, the more common causes of cancer according to experts are old age, obesity, having children late in life or not at all, not breastfeeding and alcohol. An estimated 82% women were unaware of the link, as against 95% who did link it to liver disease, and 71% who were aware it raised the risk of liver cancer.

With this study, researchers hope to make women more aware of this life threatening disease and the risks associated with it.