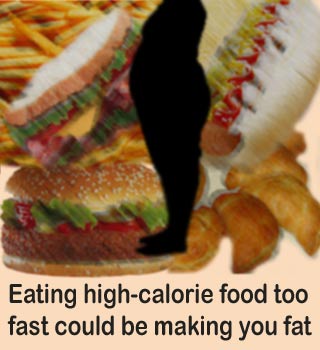 Led by Professor Hiroyasu Iso, from Osaka University Japan, scientists suggest that those who gulp down their meals way too fast are at high risks of putting on those unwanted kilos. Causing what is now leading to the obesity epidemic, the new study reveals that our modern ways of eating could be resulting in us being overweight. The main reason for this may be our brain that doesn’t get a signal of us being full if we eat too fast.

Here’s what Professor Iso has to say-“The combination had a ‘supra-additive’ effect on the risk of being overweight – more than would be expected if each eating habit was examined in isolation. If you eat slowly then there is some feedback from the brain that this is enough, and this helps stop you eating before you are full. It’s speculation at the moment but it is worth pursuing and fits with modern lifestyles.”

“These kinds of studies are very helpful because they’re not about genetic causes of obesity, which people feel they can’t do anything about, but human behaviour. The great dietary gurus of a century ago stressed the importance of chewing food for a long time and eating slowly, and those messages are even more important today”, adds Dr David Haslam, GP and clinical director for the National Obesity Forum.

As part of the research, scientists lay bare the eating patterns and habits of about 3,200 Japanese men and women aged 30-69 years between 2003 and 2006. These individuals were asked to fill up a diet history questionnaire to determine the results of their eating habits. An evaluation of their questionnaire showed that about 50% of men and nearly 58% women ate until they were full. While just below 50% participants said that they ate quickly, the group of participants who revealed to eat until full and ate quickly had a higher BMI score as against their counterparts who ate at a slower pace.

Researchers suggest that our eating habits could account for most of the additional weight we put on. The study further showed that as against those who ate too quickly and until they were full, those participants who enjoyed every bite also had a lower total energy intake. Men and women in the former group had a three times higher susceptibility of putting on weight and being obese. Even the amount of calories we consume could be a result of our eating patterns.

According to the researchers the couch potato lifestyle is the culprit. The lifestyle is normally characterized by the end of family mealtimes, inclusion of fast food, larger portions and dinners with the TV for company. Obesity researchers have a hunch is the combined blow of eating fast and until we are full. This tends to trample upon signals in the brain which would normally back us up to have a little more self control.

So if you have any intentions of shedding those extra kilos may be you need to slow down on the time you take to chew your meals. Eat quickly and your body may be suppressing your appetite not making you realize you are eating too much. We suggest you enjoy every bite of your food to avoid going overboard.

The study is published in the British Medical Journal Online First.