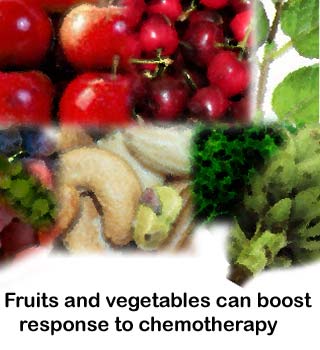 A diet comprising of fruits and vegetables has pretty much been accepted to give you endless health benefits. From staying slim to fighting various diseases a handful of fruits and veggies have certainly emerged successful. Well we’d say just continue chomping on those delicious and tasteful foods as they may now help boost the effectiveness of chemotherapy.

Conducted by biochemists at the University of California, Riverside, a new study suggests that fruits and vegetables are rich in a compound called apigenin which helps in improving the feedback of cancer cells in chemotherapy. Scientists reveal that on ingesting this naturally occurring dietary agent makes cancers more sensitive to standard DNA-damaging treatments.

A professor of biochemistry, lead researcher Xuan Liu along with her colleague Xin Cai, a postdoctoral researcher in the course of the study discovered that apigenin has certain properties which help in getting the tumour cells to respond much better during chemotherapy. Apigenin, the researchers mention possesses the ability to localise a tumour suppressor p53. p53 is a protein in the cell nucleus and localizing it completes an essential step for killing the cell. This consequently helped in tumour cells responding much better to chemotherapy.

Dr Liu, remarked, “Our study advocates the inclusion of vegetables and fruit in our daily diet to help prevent cancer.”

“In therapy you want to kill cancer cells. But to stop cell growth and to kill the cell, p53 first needs to be moved to the cell’s nucleus to function. Apigenin is very effective in localizing p53 this way,” Cai further added.

In normal situations cells have really low levels of p53 diffused in their cytoplasm and nucleus. p53 functions by moving to the nucleus and activating genes that render the cell inactive eventually causing cells to die. This normally happens when the DNA in the nucleus is damaged, so not only is the DNA damaged, but p53 makes sure cells too are dead. Researchers additionally reveal specifically in most cancers p53 is practically rendered inactive by a process called cytoplasmic sequestration. Ingestion of apigenin thus activates p53. This in turn transports it into the nucleus subsequently putting a halt to cell growth and hence cell death.

Researchers found that apigenin exhibited inhibitory properties in the treatment of many cancers including breast, colon, skin, thyroid and leukemia cells and in some cases responded well in pancreatic cancer cell proliferation too. While mostly fruits are rich in apigenin comprising of apples, cherries, grapes, certain vegetables and nuts too revealed its presence. Along with plant-derived beverages like tea and wine the vegetables that contain apigenin are parsley, artichoke, basil, celery etc.

Giving a new way to triumph the resistance of tumours to chemotherapy, scientists are hopeful the study will open novel avenues for developing safe methods of chemotherapy through naturally occurring agents.

Funded by the National Cancer Institute, the study is published online online in the Proceedings of the National Academy of Sciences.