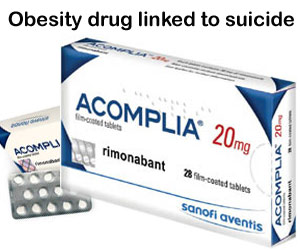 The medical terrain is abuzz with the news of an anti-obesity pill being banned from shelves due to adverse psychiatric side effects even extending to suicide. A drug called rimonabant, also known as Acomplia has been taken off the rack after the European Medicines Agency (EMEA) warn that the pill could pose risks of serious psychiatric problems and possible suicide.

Launched in 2006, Acomplia was seen as the wonder drug and was also called a £2 a day wonder pill simply because of its effectiveness in helping obese people shed that extra flab. It was also found to halt the urge to smoke. However the EMEA suggests doctors should not prescribe the drug and even recommends suspending its licenses after nearly five people reported to have committed suicide within just three months of administration of the drug.

“Following the European Medicines Agency decision to suspend the medicines license for Acomplia, the MHRA is informing UK healthcare professionals not to give any new prescriptions for Acomplia and that they should review the treatment of patients currently taking the medicine. Patients who are currently taking Acomplia should consult their doctor or pharmacist at a convenient time to discuss their treatment,” remarked Dr June Raine, Director of Vigilance and Risk Management of Medicines at the UK regulator, the Medicines and Healthcare products Regulatory Agency (MHRA).

“Most medicines work well and are acceptably safe and most people take medicines without suffering any side effects. The MHRA and the EMEA work together to continuously monitor the safety and quality of medicines after they have been licensed, and use a range of approaches to minimize risk. In the case of Acomplia these measures have not proved to be effective in clinical use,” she mentions additionally.

According to the EMAA’s Committee for Medicinal Products for Human Use, the drug was found to have harmful side effects in patients. As against clinical trials, actual use of drug reported patients to have higher psychiatric problems like depression, insomnia and suicidal thoughts. All this the EMEA says when the drug is only moderately effective in aiding weight loss. In fact many patients stop taking it after only a short period as it does not show immediate effects.

Reports show that among the 97,000 people, who have taken the drug since its launch in the UK, there has been one suicide and 1,146 reports of psychiatric problems which doctors suspect are linked to Acomplia. The European drugs regulator advises all patients who are presently on the drug to consult their doctor for an alternative treatment. Even if they stop taking Acomplia they won’t suffer from any adverse effects as such.

While the drug never got an approval in the US, it became quite popular in the UK with nearly 100,000 patients presently taking it. The Committee is particularly concerned patients taking anti-depressants should not be prescribed Acomplia. Despite strong warnings some patients in this group still use it.

As of now makers of the drug Sanofi-Aventis are hopeful that the drug will still be used as they continue research. In the meantime the EMEA has confirmed the availability of another obesity drug, orlistat, marketed as Alli without prescription.